Built in the U.S.A.: Improving a Bridge's Seismic Resistance

The bridge is one of 32 projects in the larger program, and will handle traffic heading to sports stadiums or downtown Seattle.

What makes this span special is that it is testing a method for making bridges earthquake resistant. It was built using memory-retaining metal rods and bendable concrete composite. These elements are expected to let the bridge to flex when the ground shakes, then snap back to its original shape once the shaking ends.

The Washington State Department of Transportation says that the current seismic design philosophy for most bridges is to maintain "life safety" by providing a low probability of collapse. It is uneconomical to construct a bridge that can withstand expected earthquakes without some damage. So, significant damage to some elements of a bridge is considered necessary and acceptable.

For concrete columns, damage could include concrete cracking and/or spalling and rebar stretching, the agency says. These could lead to permanent deflection or considerable leaning of the bridge.

The damaged conditions may require the bridge to be restricted to limited access, or the bridge may be closed. Potential damage may even restrict emergency vehicle access.

The location where this damage occurs typically is in the hinge region of columns. Generally, these are in the vicinity of the top and/or bottom of columns, where they connect either to the foundation or crossbeams.

Thanks for the Memory

Shape memory alloys (SMAs) are a special type of metal manufactured from either a combination of nickel and titanium, or are copper based.

These alloys have been used in robotic, automotive, biomedical, and aerospace applications. For a bridge application like the one being tested in Seattle, the metal is shaped into round bars to replace steel rebar in certain locations on bridge columns. 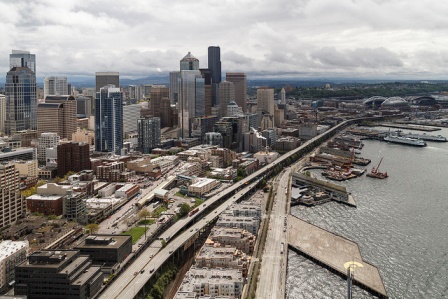 Seattle's waterfront and downtown. Credit: Washington DOTWashington DOT says that steel rebar used in bridges is similar to paper clips. If bent a little, it will spring back to its original shape. If bent too much, of course, the paper clip won’t spring back and has exceeded the yield point. Earthquake energy is dissipated using this seismic design philosophy, by stretching steel rebar beyond the point that it won’t spring back.

With SMA, the alloy deforms like steel beyond the yield point, but will spring back. This means the alloy is superelastic. Energy can still be dissipated by stretching the SMA.

In addition, engineered cementitious composite is used in the column wherever the SMA is located. ECC is similar to conventional concrete, except that is has an added ingredient. Small polymer fibers are mixed in to stop cracking when the columns are bent during an earthquake.

A research team at the University of Nevada – Reno, led by Dr. M. Saiid Saiidi, have been testing SMA and ECC with various types of equipment. Materials have been tested in tension, compression, bending, and shear. Researchers also have used shake-tables to simulate a real earthquake with a one-quarter-scale bridge.

Three scaled-down bridge columns were tested to evaluate the performance of SMA and ECC. Two columns were constructed with SMA and ECC. The other column was similar to the current column construction using conventional concrete and steel rebar, used to compare and contrast the results of the SMA and ECC.

Each column was subjected to displacements similar to an actual earthquake. The columns were pushed and pulled at increasing stages. Tests incremented with higher and higher force until the ultimate capacity of the SMA and ECC were reached. The test results showed a significant reduction in permanent displacement and limited damage as compared to the conventional construction.

The Alaskan Way Viaduct, an elevated section of State Route 99 in Seattle, was built in the 1950s, and decades of daily wear and tear have taken their toll on the structure. Because of the viaduct’s age and vulnerability to earthquakes, replacing it is critical to public safety.

The Alaskan Way Viaduct Replacement Program includes projects led by the Washington State Department of Transportation, King County, the City of Seattle and the Port of Seattle. The Federal Highway Administration is a partner in this effort.

By posting a comment you confirm that you have read and accept our Posting Rules and Terms of Use.
Advertisement
RELATED ARTICLES
Rebuilding Damaged Bridges ASAP
A Faster Way to Fix Earthquake-Damaged Bridge Columns
Innovative Building Materials that will Impact Future Architecture
Floating Bridge Opens in Seattle
Flexible Materials Help Keep Bridges Open in a Big Quake
Advertisement