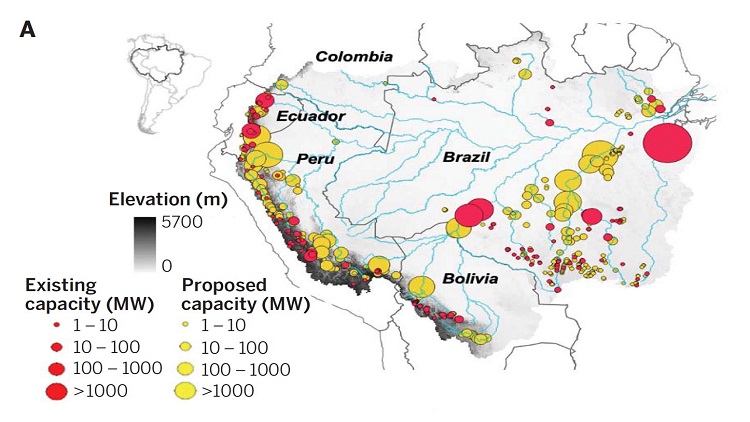 Hydroelectric power is a major component of policies to expand access to electricity and contain greenhouse gas emissions, but this power player can incur significant environmental costs. A computational approach for evaluating basin-level tradeoffs between hydropower and ecosystem services has been developed by an international research team with the goal of guiding sustainable dam siting.

The Amazon EcoVistas algorithm was applied to the existing and 351 proposed dams to generate scenarios based on all possible combinations of these projects. The tool determines the Pareto-optimal frontier, or combination of hydropower projects that minimizes negative environmental effects for any given level of aggregate hydropower output.

The analysis published in Science confirms that lack of strategic coordinated planning has resulted in lost environmental benefits and recommends multi-objective optimization to identify the many dam sites that would yield particularly negative results. Simultaneous consideration of multiple criteria is critical for identifying the least detrimental projects with respect to ecosystem services, including fisheries, biodiversity, floodplain agriculture and undisrupted navigation. Basin-wide analysis, in contrast to planning a smaller scale, is also essential for preventing loss of these ecosystem service benefits.

By posting a comment you confirm that you have read and accept our Posting Rules and Terms of Use.
Advertisement
RELATED ARTICLES
Boom in Hydropower Could Endanger Freshwater Biodiversity
How well-intentioned hydropower is threatening some of the last wild rivers
The world’s largest hydropower dams
UN report cites aging dams as growing threat
A Question of Hydropower-food Security Balance
Advertisement