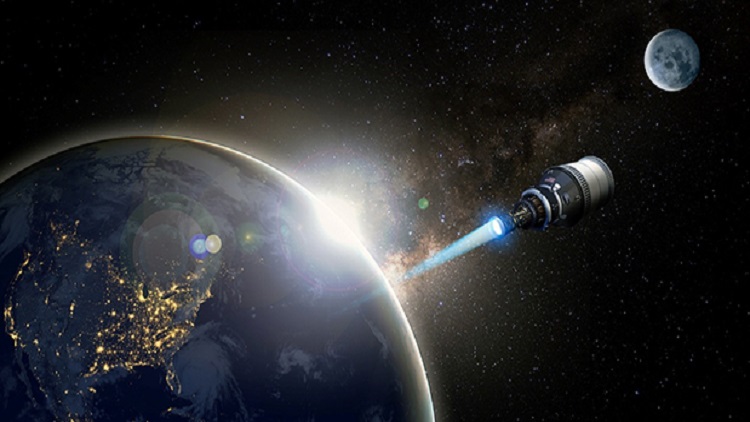 The U.S. Department of Defense plans to deploy agile, responsive spacecraft in cislunar space — the spherical space between Earth’s atmosphere and the Moon — but current electric and chemical propulsion systems have limited thrust-to-weight and propellant efficiency. The agency seeks to develop nuclear thermal propulsion (NTP) technology for such missions through the Demonstration Rocket for Agile Cislunar Operations (DRACO) program.

Managed by the U.S. Defense Advanced Research Projects Agency (DARPA), the program will deliver a preliminary NTP system design for validation within low-Earth orbit in the next five years. An NTP system using energy released by nuclear fission can heat hydrogen propellant to extreme temperatures before expelling it through a nozzle to produce thrust that outperforms electric and chemical propulsion systems. Compared to conventional space propulsion technologies, NTP offers a high thrust-to-weight ratio around 10,000 times greater than electric propulsion and two-to-five times greater specific impulse than chemical propulsion.

A Phase 1 competitive solicitation process awarded a contract to General Atomics Electromagnetic Systems for the design of the nuclear reactor that will power the DRACO. Blue Origin and Lockheed Martin will work on a parallel track to design a spacecraft tailor-made to demonstrate the NTP system.

A solicitation has been issued by DARPA for Phases 2 and 3, which are expected to take about three to four years in total and culminate in an in-space NTP flight demonstration in fiscal year 2026. Phase 2 is expected to take 24 months and include a complete preliminary and detailed design of the demonstration as well as construction and experimental validation of the flight engine, including the nuclear reactor, nozzle, controllers and associated equipment to drive the propellant from its tank and through the reactor. In Phase 3, anticipated to last about 15 months, the hydrogen tank would be fully fabricated and undergo performance testing while fully loaded. Ultimately, Phase 3 would include the launch and in-orbit demonstration of the NTP engine at full power and full thrust.

By posting a comment you confirm that you have read and accept our Posting Rules and Terms of Use.
Advertisement
RELATED ARTICLES
DARPA, NASA develop rockets, space vehicles for cislunar space
Video: NASA to test nuclear fuel for space missions
DARPA urged to consider nuclear propulsion as power source for military satellites
Nuclear thermal systems advance for space propulsion
Satellite Attempts to Demonstrate Use of Water as Propellant
Advertisement