Ice cores from polar regions offer a snapshot of past environmental conditions and can provide a wealth of information on climate oscillations and trends. To learn more about the Earth's climate and environmental history, an international research team will collect the oldest continuous ice core in Antarctica and provide a record of the climate spanning some 1.5 million years.

Drilling has begun in the European Commission-funded Beyond European Project for Ice Coring in Antarctica (EPICA)-Oldest Ice project initiated in 2019 and scheduled to continue through 2026. The venture is coordinated by the Institute of Polar Sciences of the National Research Council of Italy with participation from British Antarctic Survey, University of Bern (Switzerland), University of Grenoble-Alpes (France) and Alfred Wegener Institute (Germany) researchers. 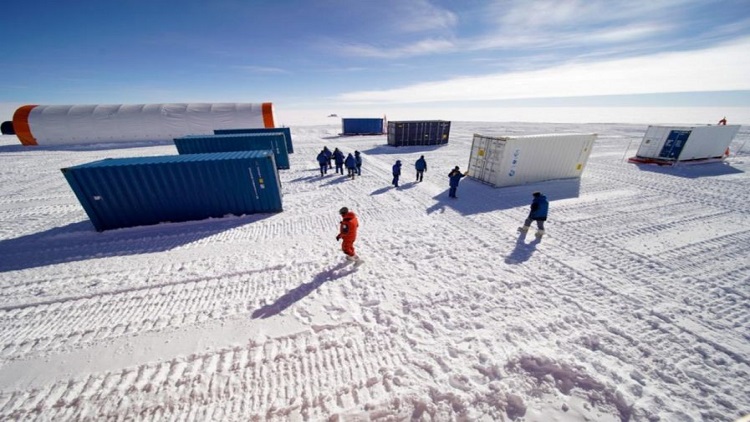 Setting up the Beyond EPICA field camp in 2020. Source: Armand Patoir/French Polar Institute/PNRA

“During our previous EPICA project, which ended in 2008, we managed to extract and analyze an 800,000-year-old ice core. Now we are trying to travel back further in time: because if we are to gain a correct perspective on what the world is currently experiencing with climate change, and adopt suitable mitigating strategies, we must look back even further — which is what we are trying to do in Antarctica with Beyond EPICA,” said lead scientist Carlo Barbante, director of the Institute of Polar Sciences of the National Research Council of Italy.

The initial drilling campaign will last until January 2022 at Little Dome C, an area of 10 km2, located 40 km from the Italian-French Concordia Station, on the east Antarctic plateau. An average coring rate of 170 m per week is targeted for the campaign, which is expected to shed light on the ratio of greenhouse gases in the past, climate changes and the structure of the ice cap and the topography of its bedrock.

Follow the field diary of the current Beyond EPICA-Oldest Ice field season.