Ice losses from Antarctica have tripled since 2012, according to a major new international climate assessment funded by NASA and the European Space Agency (ESA). The trend has increased global sea levels by 0.12 in. (3 mm) in that time frame alone. Since 2012, the amount of ice loss per year has tripled to 241.4 billion tons (219 billion metric tons).

Analysis of the mass balance of the Antarctic ice sheet from 1992 to 2017 revealed ice losses from Antarctica raised global sea levels by 0.3 in. (7.6 mm), with a sharp uptick in ice loss in recent years. The threefold 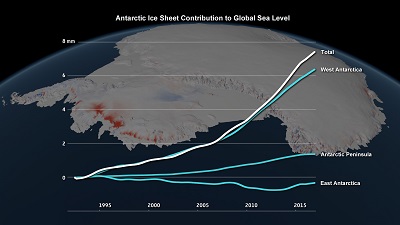 Source: ESAincrease in ice loss from the continent since 2012 is attributed to a combination of increased rates of ice melt in west Antarctica and the Antarctic Peninsula, and reduced growth of the east Antarctic ice sheet.

The researchers concluded that Antarctica's potential contribution to global sea level rise from its land-held ice is almost 7.5 times greater than all other sources of land-held ice in the world combined. The continent stores enough frozen water to raise global sea levels by 190 ft. (58 m) if it were to melt entirely.

The analysis, which combined 24 satellite surveys of Antarctica and involved 80 scientists from 42 international organizations, is published in Nature.

This is sobering news for everyone, unless you believe that Earth is only 6,000 years old.

Those alive today, their offspring and generations of offspring may not be adversely affected.

However, coastal Naval and military bases are already seeing the sea levels rise in many places. Little to nothing is being done and NASA's Earth climate satellite study budget has been decimated.

It really is only a small but well connected group of deniers who refuse to acknowledge why this is happening. The real crux of the problem is a three fold problem of circumstance.

I know, I know. We're preaching to the choir or at least you and I to each other right now. Any moment now, the naysayers will swarm in thumping their Puritanical chests like razorback gorillas trying to attract a mate.

At least some (3) of the most obnoxious gorillas are no longer on here.

None of the remedies are easy, nor inexpensive.

Ignorance may be bliss, but it can also be fatal.

I wonder what might be causing this ice loss?

appears to be another radical conservative propaganda machine, based in the heart of KKK land, Alabama.

Not sure if the name is related to the bird of the same name.

This is classic denial propaganda. The article by Michael Bastasch discusses a paper by Jay Zwally that has yet to be released. <Translation> This article contains no factual information.

The article claims the main reason the yet to be released paper differs from consensus papers is that it uses a different adjustment of the Glacial Isostatic Adjustment (a fudge factor) for how much the Earth under this ice moves due to a load change. Nowhere in this brief hatchet job of an article about a paper that may or may not one day exist is there any mention of either the measurements or assumptions one must take to reach any conclusion.

A quick Google search for Jay Zwally shows that H. Jay Zwally is a glaciologist with NASA and that he along with others wrote just such a paper and published it back in July 2017.

I found this information by reading the much more thorough article by the Scientific American author, Shannon Hall. This article in particular and others I read about H. Jay Zwally's paper, but do not cite here, lead me to a few conclusions:

To paraphrase Shannon Hall's conclusion, a scientific outlier ultimately ends up reinforcing science by showing where the flaws lie regardless of bias.

Great assessment. It always amazes my how one renegade, or even a few can sway so many gullible people.

Now, we are at a severe disadvantage with the new administration falsely claiming that science is a waste of money. Amazingly, this is one of the few things they seem to not have changed their opinion on every week.