Researchers working in the Antarctic are using fiber optic cable to gain a better understanding of the effects of climate change on the ice, specifically its movement and deformation.

The work involves the detection of microseismicity, earthquakes that are too small to be felt. The size of these small earthquakes, or ice quakes, is described by one of the researchers, Tom Hudson of the University of Oxford, as the equivalent of a book falling off a table, a magnitude of approximately -1.

The researchers are working on methods of distributed acoustic sensing (DAS). The process uses the 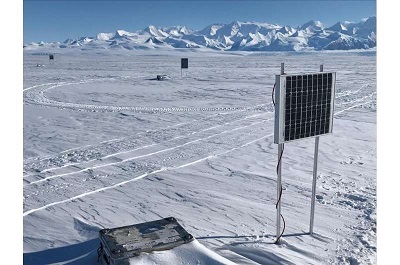 Fiber optic seismology array in Antarctica. Source: Michael Kendall/University of Oxfordthousands of tiny internal flaws that occur in optical fiber as seismic sensors. A laser pulse from an instrument sends laser pulses down the cable and measures the “echo” of each pulse as it encounters the fiber’s internal flaws.

When earthquakes disturb the fiber, changes occur in the size, frequency and phase of laser light scattered back to the DAS receiver. These changes can be used to characterize the seismic event.

Anna Stork, a geophysicist at Silixa Ltd., explained that the results could also be used to improve future monitoring of carbon capture and storage projects. Michael Kendall, of the University of Oxford, added that a network similar to the one in the Antarctic could be configured to detect the microseismicity triggered by carbon storage.

"Our work also demonstrates a method of using DAS fiber arrays to investigate microseismic earthquake source mechanisms in more detail than conventional geophones," said Hudson. "If we can analyze the source mechanism — how an earthquake fails or fractures — then we may be able to attribute the earthquake to the movement of fluids like carbon dioxide in a reservoir."

The team deployed the fiber optic cable on the ice surface at the Rutford Ice Stream in a linear and triangular configuration. The challenges of using fiber optic cable included getting it there, which required sending it in pieces by boat and plane. In addition, the fiber had to be buried to reduce wind noise and the signal of the generator powering the DAS instrument.

"We housed the instrument in a mountaineering tent, which basically served as a tiny office," Stork explained. "Keeping temperatures within the recommended operating limits was a challenge. The radiative heating from the sun warmed the tent to well in the 30s [degrees Celsius], even though it was -10° C outside."

The researchers are sharing their data with climatologists and others studying the movement of glaciers and ice in Antarctica and hope to work with scientists drilling ice cores as well who use fiber as distributed temperature sensors. The fibers that they put down boreholes could be used for these seismic studies, Kendall said.

This is the first study of icequakes in Antarctica to use DAS. The research was presented at the Seismological Society of America’s 2021 Annual Meeting.

By posting a comment you confirm that you have read and accept our Posting Rules and Terms of Use.
Advertisement
RELATED ARTICLES
Dark Fiber Used as a Seismic Monitoring Tool
Cables as seismic sentinels for submarine earthquakes
Penn State "listened" to the sounds of COVID-associated lockdowns, re-openings
Watch: Seismic shield engineered for Giant Magellan Telescope
Sensor system takes temperature trends in Greenland glacier
Advertisement