Researchers from Harvard University, Brigham and Women's Hospital and Harvard Medical School have developed an ink composed of living cells that could potentially be used in the 3D printing of living materials.

To accomplish this, the team devised a way to engineer Escherichia coli (E. coli) — bacteria found in the environment, foods and intestines of people and animals — to use as the foundation for the ink. 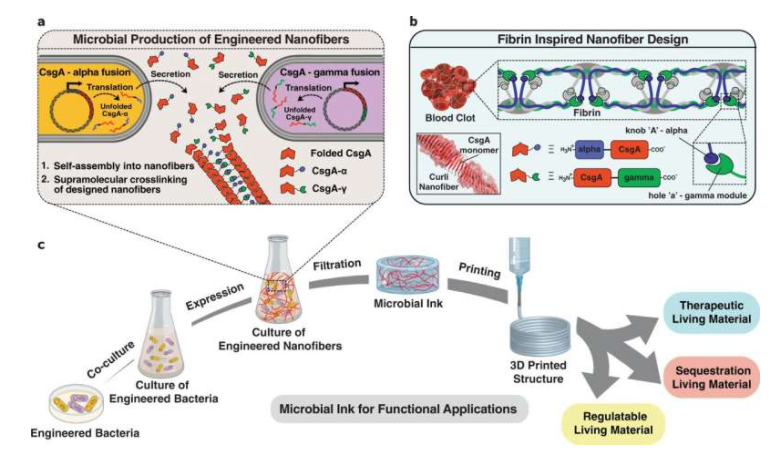 Schematics of the design strategy, production, and functional applications of microbial ink. a E. coli was genetically engineered to produce microbial ink by fusing α (knob) and γ (hole) protein domains, derived from fibrin to the main structural component of curli nanofibers, CsgA. Upon secretion, the CsgA-α and CsgA-γ monomers self-assemble into nanofibers crosslinked by the knob-hole binding interaction. b The knob and hole domains are derived from fibrin, where they play a key role in supramolecular polymerization during blood clot formation. c The protocol to produce microbial ink from the engineered protein nanofibers involves standard bacterial culture, limited processing steps, and no addition of exogenous polymers. Microbial ink was 3D printed to obtain functional living materials. Source: DOI: 10.1038/s41467-021-26791-x

The team reportedly bioengineered the bacteria to create living nanofiber. Once the nanofibers were bundled, the researchers incorporated additional ingredients that resulted in a living ink appropriate for use in standard 3D printers.

When the team determined that the process was successful, they bioengineered other microbes to eventually manufacture other types of living fiber that can be used to 3D print objects with living components, including a material that secretes the anti-cancer drug azurin.

The researchers believe that the process could be used in the making of renewable building or self-healing construction materials.