How to produce rocket biofuel for return trips from Mars 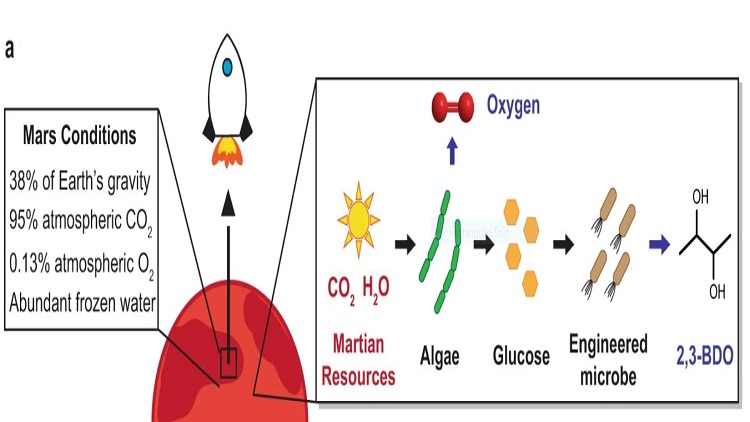 Transporting astronauts to Mars is a daunting challenge but returning them to Earth could prove the toughest logistical problem. Carrying sufficient methane and liquid oxygen for a round trip adds extra weight to the spacecraft, increasing costs as well as risks. A solution advanced by Georgia Institute of Technology researchers is to produce rocket fuel in situ using available Martian resources.

The biotechnology-based process outlined in Nature Communications can produce both 2,3-butanediol (BDO) propellant and liquid oxygen from the carbon dioxide abundant in the Martian atmosphere. Other process ingredients include solar radiation and frozen water known to exist on the planet, as well as microbial agents imported from Earth.

[See also: How to find water on the Moon and Mars]

Sugars synthesized from carbon dioxide and sunlight by cyanobacteria can be converted by engineered Escherichia coli bacteria into BDO as propellant.

The conversion process will require assembly of large-scale photobioreactors to support cyanobacterial growth. Enzymes in a separate reactor would break down the cyanobacteria into sugars, which could be fed to the E. coli to produce the rocket propellant. The propellant would be separated from the E. coli fermentation broth using advanced separation methods.

The process also generates 44 tons of excess oxygen that could be used for life support.

By posting a comment you confirm that you have read and accept our Posting Rules and Terms of Use.
Advertisement
RELATED ARTICLES
NASA Close to Building a 3D-Printed Rocket Engine
Biohybrid reactor yields organic feedstocks for use on Mars or Earth
Vector Awarded Patent for Enhanced Liquid Oxygen-Propylene Rocket Engine
American-made BE-4 Rocket Engine Could End U.S. Dependence on Russian RD-180
NASA launches new rover Perseverance to Mars
Advertisement