Three single phase Pretact generator step-up (GSU) Sensformer transformers from Siemens Energy have been deployed to provide a solution in response to a failed conventional transformer at a combined cycle power plant.

The Pretact transformers are designed to serve as replacement equipment in the event of transformer outages. These are multi-voltage, modular transformers that can be deployed anywhere and configured to match customer requirements using biodegradable insulating fluids that reduce environmental risks during transport and operation. They also offer smart technology that transmits real-time data to a cloud-based storage, analytics and visualization platform to allow for performance optimization.

Siemens Energy is leasing the transformers to the facility, which made it possible for the power plant to 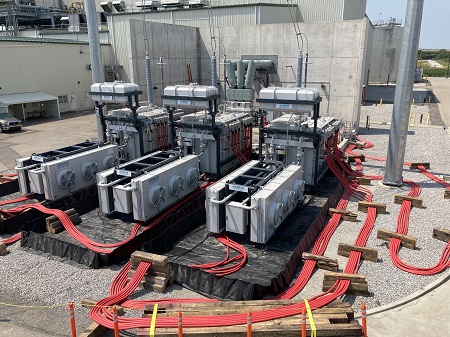 These units can be deployed rapidly in the event of transformer outages. Source: Siemens Energyreturn to service in less than two months from a forced outage caused by a failure of their existing, conventional GSU transformer. The Pretact Sensformers will be in service until Siemens Energy delivers a new, permanent replacement transformer. The project is part of the Pretact transformer program that aims for rapid deployment of equipment to minimize outage times.

This solution is designed to improve grid resiliency by offering mobile plug-and-play units that can quickly restore power after a failure at either a substation or generating facility or to avoid disruptions during grid maintenance and upgrades. Compared to conventional transformer replacements, which might not be available for 9 to 12 months after an outage, the easy-to-install Pretact technology allows for rapid reinforcement of a power grid in an emergency or due to unexpected events, as well as during seasonal peak loads or when networks expand.