Single-phase transformers accept single-phase alternating current (AC) power and output single-phase AC power, typically at a higher or lower voltage level. Energy is transferred from one circuit to one or more circuits via electromagnetic induction. 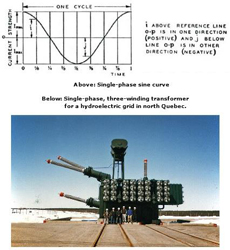 operates in a unified time phase. They are often used to step-down long distance and localized transmission currents into power levels more suitable for residential and light-commercial applications. The ratio of primary (input) windings to secondary (output) windings determines the change in current. Single-phase transformers with a 1:1 ratio can be used to isolate circuits. They abide by Ohm's law, and outside of minor inherent loss due to heat, do not create or remove power.

Single-phase transformers are more popular than three-phase transformers in non-urban areas, as the cost of a three-phase distribution network is much higher, and the overall electrical demand is lower. The highest voltage available in a single-phase network is regulated by utility infrastructure and industrial regulations. A single-phase transformer is frequently used for power distribution and voltage reduction for residential and commercial applications. When used with appliances, the lower voltage output is often rectified into direct current (DC) before powering appliances, such as a computer.

The ratio of primary (input) coils to secondary (output) coils determines if the voltage is increased or decreased after routing through the transformer. Some transformers have an adjustable turn ratio, while others maintain 1:1 (or near 1:1) ratio to simply isolate circuits. Other transformers utilize a single coil, and voltage is transmitted by tapping the coil at an intermediate point.

The overall size and weight of a transformer ultimately determines how it should be installed.

The accompanying parameters are important when considering single-phase transformers.

Transformer design and applications are meticulously standardized. Many guidelines exist regarding single-phase transformer applications and manufacture. Prominent standards include:

By posting a comment you confirm that you have read and accept our Posting Rules and Terms of Use.
Re: Single-Phase Transformers Information
#1