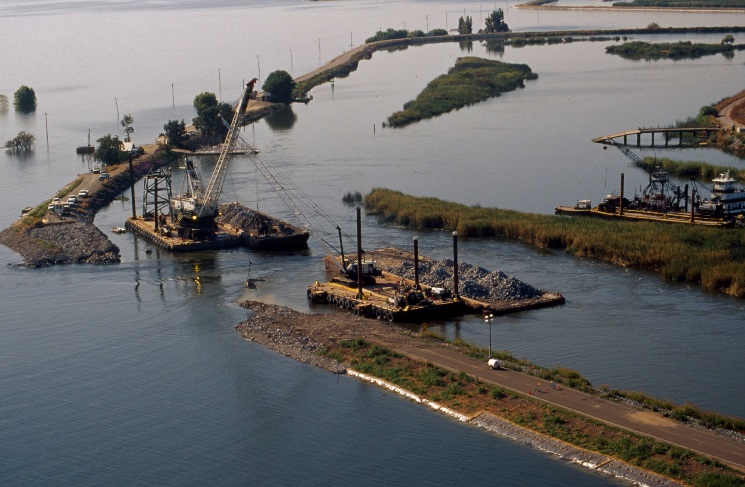 A 2004 levee failure was caused by a burrowing beaver. The breach caused $90 million in damage. Image source: NASA/JPL.

In the first five days of October 2015, a storm unleashed 1 trillion gallons of rainfall on South Carolina. The biggest downpours occurred in a 12-hour period, damaging some of the state’s dams and causing 36 of them to fail. These failures likely contributed to the already rising floodwaters, which took 15 lives, closed hundreds of roads and bridges and resulted in economic damage that early reports suggested could exceed $1 billion.

(Also read "Hardening the Energy Coast" and "How Engineers Can Adapt Infrastructure Design for a Changing Climate.")

Like the levee failures in New Orleans during Hurricane Katrina in 2005 and the storm surges of Hurricane Sandy in 2012, the failure of South Carolina dams underlines weaknesses in the United States’ water-control infrastructure. Rising sea levels, increasingly extreme weather events, population growth and constraints in funding and public policy are expected to exacerbate the situation.

Amidst the adversity, engineers must tackle both technical and human-related complexities to ensure the integrity and safety of dams and levees across the country.

The 2013 Report Card for America’s Infrastructure, published by the American Society of Civil Engineers (ASCE), gave a grade of D to the nation’s dams and D- to levees. The United States has about 87,000 dams. Together, they have an average age of 52 years. By 2020, 70% of dams in the country will be more than 50 years old. Most of them were built between the 1930s and the early 1970s. 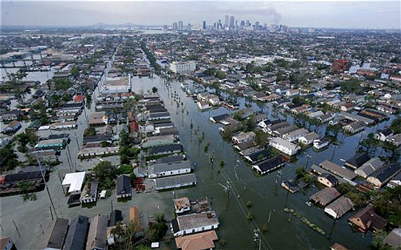 Levee failures flooded portions of New Orleans, Louisiana, after Hurricane Katrina struck the area in 2005. Image source: Wikimedia.Engineers designed dams to the standards they “believed to be reasonable and appropriate at the time,” says John France, Dams and Hydropower Technical Practice Network National Leader for international engineering firm AECOM. “But over time we have seen that the flood and earthquakes we should be designing for have changed.”

For instance, the volume of expected floods has increased in some places. Engineers also rely on historic flood records in their design work, but need to determine “if that is the same historic flood record we will use going forward when considering climate change,” France says.

The infrastructure report card also points to the increasing amount of high-hazard-potential dams due to a phenomenon known as “hazard creep.” U.S. dams fall into hazard classifications that address the downstream consequences in the case of failure, rather than the condition of the structure itself.

According to the National Inventory of Dams, 14,726 dams in the United States fall into the high-hazard-potential category. This means that a failure would result in at least one fatality downstream of the dam. State and federal dam safety regulators have identified deficiencies in about 2,000 of these dams that could lead to failure.

Another 12,406 dams that are classified as having “significant-hazard potential” could cause substantial economic losses and/or environmental damage if they failed. Finally, failure of low-hazard-potential dams may result in dam loss or flooding of the immediate area.

Hazard creep happens when development or other change occurs downstream of low-hazard dams. A dam built in an unpopulated rural area, for example, may have been designated as low hazard yet require upgrades to meet high-hazard-potential standards as a result of changing downstream land uses.

However, if dams receive a poor grade, then the infrastructure report card thinks even less of U.S. levees. Part of the problem is that no one knows for sure how many miles of levees—man-made structures built to prevent and manage flooding—exist in the U.S. Estimates put the total at 100,000 miles, but there is no complete database of inventory and conditions.

Like the hazard creep evident in dams, levees originally designed to defend farmland in floodplains across the U.S. are now protecting increasingly populated areas. Some levees have been around since the 1850s and perhaps earlier. Moreover, these older levees likely have doubled or tripled in size as additions and extensions were added to them.

“We don’t have a good way of rapidly assessing the integrity of levees like we do with dams,” says Gerry Galloway, a flood-management expert and professor of engineering at the University of Maryland. “It’s difficult to know factors such as the base elevation or subsurface conditions that could cause problems.”

The diversity of dam ownership and regulatory bodies charged with overseeing them further complicates the puzzle of maintenance, repair and safety. 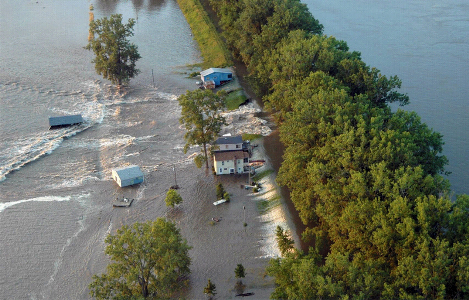 The Iowa River floods the town of Oakville, Iowa, following a levee breach in June 2008. The federal government, for example, owns 4% of the nation’s dams. Private entities, meanwhile, own 65%, with the rest belonging to state and local governments. State dam safety programs regulate the permitting and inspection for 77% of dams.

Dam safety programs vary state-by-state, but share common challenges. According to the Association of State Dam Safety Officials (ASDSO), one safety inspector is available for every 207 dams across the country. In South Carolina, which suffered damage in the October 2015 flooding, that ratio is 1 to 380. Furthermore, underfunded and understaffed state dam safety programs can lead to long intervals between inspections.

Even when a dam undergoes inspection, its owners does not always have the resources to maintain, repair and upgrade it. A water-supply dam owned by a municipality, for instance, could require higher water rates to generate funds for repairs, says Mark Ogden, ASDSO project manager. For individual property owners or associations, “there is no revenue stream for those dams.” Ogden also says that some state regulatory bodies lack sufficient authority to require dam owners to make repairs or establish an emergency action plan.

Despite a lack of funding and a growing backlog of dam safety issues, federal oversight and inspection agencies have more resources to perform proper assessments than their state counterparts, says Galloway. When the U.S. Army Corps of Engineers or Bureau of Reclamation inspects dams, they bring a team of experts “who are digging hard, both literally and figuratively, to find problems,” Galloway says. “You can’t afford that as a state. You just don’t have enough people to do it.”

Why Infrastructure Fails…and How to Fix It 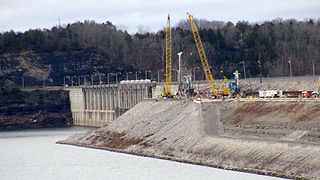 Construction crews work to install a concrete barrier wall into the embankment at Wolf Creek Dam in 2013. Image source: U.S. Army photo by Leon Roberts.Internal erosion is another factor leading to dam and levee failure. As water flows through the spaces between the particles of earth in a dam, the flow rate of seepage can carry the particles away, eroding a cavity within the structure. This internal erosion can work its way back to the reservoir side of the embankment and cause a breach and even a collapse of the entire structure.

Civil and geotechnical engineers are exploring new technologies and improved methods to rehabilitate dams and levees.

Embankment overtopping protection provides additional spillway capacity to convey large floods. This is accomplished by placing a hard erosion-resistant material on top of the embankment.

Fuse plugs offer another option to manage spillways in high-flood situations. Earthen fuse plug spillways are designed to maintain their integrity until water in the reservoir reaches a predetermined level. Once that level is reached, the plug erodes away, allowing a controlled release of part of the reservoir into the downstream floodplain. Fuse gates work the same way, but use steel or concrete structures that tip and open at a prescribed reservoir level to control the water release.

To prevent internal erosion, engineers often retrofit embankment dams with filters. These filters comprise zones of coarser-grained soils that allow water to flow while keeping base soil particles from moving.

Meanwhile, methods for constructing seepage reduction/barrier walls have become “increasingly sophisticated and more capable to where we can build these walls at a much greater depth in a more controlled manner than we used to,” says AECOM’s France. He cites the 64-year-old Wolf Creek Dam on the Cumberland River in Kentucky. In 2013, the Army Corps of Engineers built a concrete barrier wall 275 feet deep to address ongoing reservoir seepage problems. Built using newer technology, the wall was part of a $594 million dam rehabilitation project.

While structural analysis addresses the mechanisms behind failure, it overlooks human organizational factors. As a key investigator in the aftermath of Hurricane Katrina in New Orleans, Bob Bea saw this firsthand as engineers often evaluated only the physical causes of the levy breaches.

Bea, professor emeritus at the University of California Berkeley’s Center for Catastrophic Risk Management, suggested that his peers instead focus on “the people who have responsibilities for that system before and after it failed.” Failures result from what Bea calls “a universal equation for disaster:” A+B=C. He says that “A” represents natural hazards such as storms, hurricanes and floods. “B” represents human hazards such as hubris, arrogance, greed, complacency, ignorance and indolence. And “C” equals major disasters that will occur sooner or later.

The “B” factors represent “the critical things engineers like me” ignored and that turned into “consistent components in major failures,” he says.

Bea applied these lessons when investigating the June 2008 floods in which levees across the Midwest breached following months of heavy precipitation. He did the same analysis when forming Resilient and Sustainable Infrastructures (RESIN) in 2010, a project funded by the National Science Foundation to develop and validate methods to evaluate risk associated with engineered infrastructure systems. 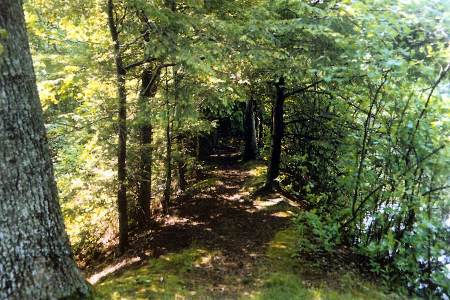 Vegetation growing on an earthen dam can cause structural damage. Image source: Ohio Dept. of Natural ResourcesThe project looked at the California Delta infrastructure system. Protected by 1,100 miles of levees, the Delta directs drinking water to 23 million people as well as irrigation water for several million acres of agriculture. Despite severe drought conditions in recent years, the region and its residents remain vulnerable to the ongoing threat of flooding.

Bea wanted a diverse group working together to understand this complex system, so he assembled a team of professionals from sectors such as social science, political science, public health and law. The team focused their study on Sherman Island, a chokepoint through which important infrastructure systems such as highways, gas, electrical and telecommunications lines crossed. The point also is situated between the Delta, dominated by freshwater, and the salt water in San Francisco Bay.

The six-year study concluded that the risks associated with Sherman Island “were clearly not acceptable,” Bea says. The results were published in multiple peer-reviewed journals and conference proceedings, but generally were ignored both by engineers and those responsible for public policies, he says. The interdisciplinary approach “proved to be crucial in explaining to us how the persistent failures in dams and levees get embedded in our systems.

For him, the findings illustrate the troubles plaguing flood-management infrastructure. Failure preparation emphasizes emergency response rather than reducing the likelihood and consequences of a failure to ensure that risks “are as low as reasonably practicable, or are acceptable to the affected publics, environments, industries and governments,” he says.

In hardening the U.S. flood-management infrastructure, the civil engineering community faces monumental tasks with no easy solutions. Funding may be short, but engineers strive to find answers within enormously complex parameters.

By posting a comment you confirm that you have read and accept our Posting Rules and Terms of Use.
Advertisement
RELATED ARTICLES
Work Starts on $200m Dam Strengthening Project
These 6 Steps Could Protect Against Future Hurricane Flooding
How Engineers Can Adapt Infrastructure Design for a Changing Climate
TVA Protects 2 Nukes from Floods and Rebuilds a Leaky Dam
UN report cites aging dams as growing threat
Advertisement