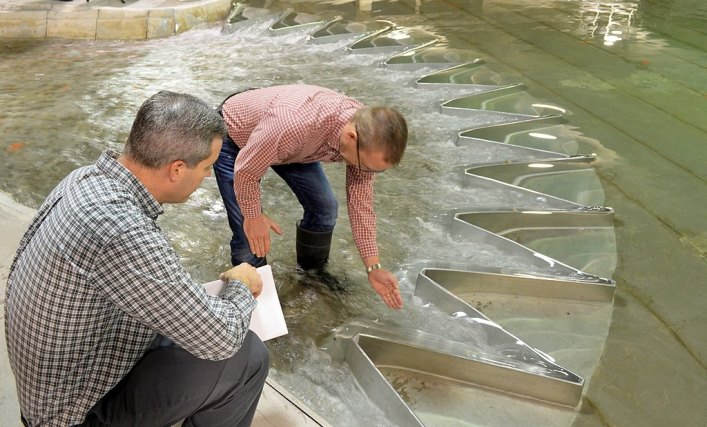 Work is under way on the $204 million second phase of the Isabella Dam project near Bakersfield, Calif. The project began after a 2006 report found the 65-year-old dam had an "unacceptably high probability of failure." Work includes raising the dam, sealing leak,s and improving its seismic resiliency. 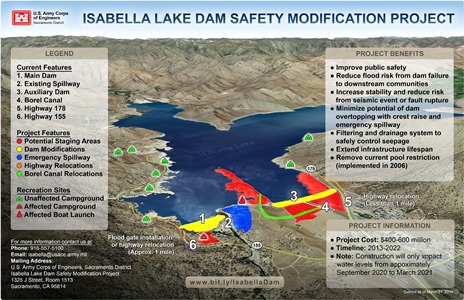 (Click to enlarge.) Graphic of dam strengthening project. Credit: USACEThe main dam is a 185-foot-high earth-fill dam, and the auxiliary dam is a 100-foot-high earth-fill dam. The service spillway is located between the two dams. The reservoir has a gross storage capacity of 568,075 acre feet. The dam was authorized under the Flood Control Act of 1944 and construction was completed in 1953.

Isabella Lake and its dams reduce flood risk for Bakersfield and the surrounding region, and is a primary water source for water users throughout Kern County. The project is expected to be complete by 2022.

With more than 300,000 people living and working below the dams, primarily in the town of Lake Isabella and the city of Bakersfield, the U.S. Army Corps of Engineers began a dam safety modification study in 2006 to address seismic, hydrologic (potential over-topping during an extreme flood event) and seepage issues at the dams.

By posting a comment you confirm that you have read and accept our Posting Rules and Terms of Use.
Advertisement
RELATED ARTICLES
Work starts to raise a dam and ease downstream flood worries
Hardening the Infrastructure: Flood-Management Controls
TVA Protects 2 Nukes from Floods and Rebuilds a Leaky Dam
Oroville Dam Spillway Is Ready for Winter
Highest Dam in the U.S. Faces Threat
Advertisement