TVA Protects 2 Nukes from Floods and Rebuilds a Leaky Dam

The Tennessee Valley Authority says it has finished work on an eight-year project to provide extra protection for nuclear power plants in the event of a worst-case-scenario flood.

The final project was to install a seven-foot-high concrete flood wall at TVA’s Fort Loudoun Dam. In all, work was done at five TVA dams to further protect the Watts Bar and Sequoyah nuclear plants. 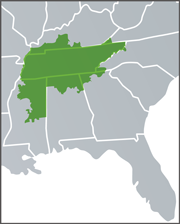 The Fort Loudoun flood wall is designed to temporarily contain the waters of the Tennessee River should it rises to unusually high levels during extreme weather events. Stretching about 1,200 feet and designed to hold back waters cresting at 837 feet above sea level, the wall is four feet higher than the old wall it replaces.

The Fort Loudoun work also included construction of a 1,400-foot-long rolled compacted concrete section of the dam’s South embankment, and modification of another section of the dam with post-tension anchors and steel bar reinforcement. 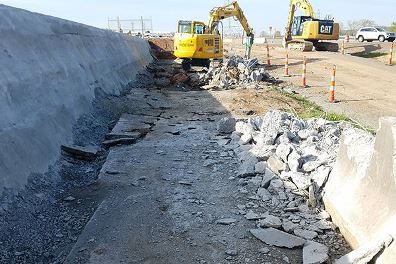 Part of the new wall at the Ft. Loudoun dam, and the structure (right) it replaces. Credit: TVAThe Tennessee Valley Authority is a corporate agency of the U.S. that provides electricity for business customers and local power companies serving 9 million people in parts of seven southeastern states. TVA also provides flood control, navigation, and land management for the Tennessee River system and helps local power companies and state and local governments with economic development and job creation.

The flood control work stems from TVA’s 2009 decision to modify Cherokee, Douglas, Fort Loudoun, Tellico, and Watts Bar dams to safeguard against a probable maximum flood (PMF). TVA says that a flood this extreme has never occurred and is "highly unlikely."

Even so, initial modifications included temporary barriers made by stacking wire-mesh containers, known as "Hesco" barriers, filled with sand to raise the flood wall height. About 18,000 feet of Hesco barriers filled with 30 million tons of sand were used. All have been replaced with permanent concrete flood walls or earthen embankments. Sand from the discarded barriers is being used to maintain walkways and trails, and to support other work at TVA sites and facilities.

In a separate project unrelated to the nuclear generating units, TVA is in the midst of a five- to seven-year project to strengthen Boone Dam. In October 2014, a sinkhole was discovered near the base of the embankment at the dam. Water and sediment were found to be seeping from the riverbank below. TVA says that the locations of the sinkhole and the muddy discharge were indicators of potential dam safety issues.

TVA put in place a number of interim risk reduction measures, including lowering the pool elevation to 1350 feet to 1355 feet (roughly 10 feet below winter pool levels), assigning onsite inspectors to the dam for continuous surveillance, installing an automated network of sensors to monitor the dam for pressure and temperature changes every 15 minutes and for movement every 30 minutes, exercising an emergency action plan, and building a tailrace filter to minimize further deterioration of the dam.

TVA says that the original designers of Boone Dam in the early 1950s encountered highly irregular bedrock known as “karst.” This rock consists of local pinnacles separated by 20- to 30-foot deep crevices. Near the surface of the bedrock and within these pinnacles, in a part of the ground termed “epikarst,” they encountered voids and soft muddy soils. To limit reservoir seepage underneath the dam, a deep excavation called a “cutoff trench” was created to remove the voids and soft soils within the rock pinnacles and epikarst. Additionally, grout was pumped into the foundation to fill any remaining voids beneath the embankment dam.

Although the foundation treatment was state of the art in the 1950s, TVA says that dam safety engineers now recognize the potential for deterioration with this type of construction.

In March 2015, TVA says it discovered a "well-developed, complex network of groundwater seepage paths" coming from sources other than the reservoir. The land east of the dam is higher in elevation and contains numerous depressions and sinkholes. During large rain events, surface runoff flows underneath the dam and is a leading contributor to the seepage and sinkhole at the toe of the dam. Further investigation confirmed that deterioration of the cutoff trench has occurred as seepage flows undermine the embankment dam foundation.

As of April 2018, more than 170,000 tons of rock had been placed on both sides of the dam to fortify it during construction. Berm construction is expected to be completed by June 1.

The five- to seven-year timeframe announced by TVA in 2015 includes three major project phases: planning, design, and construction, all of which are expected to be completed by 2022. TVA says it will have completed the major planning and design activities for the composite seepage barrier this fall.

By posting a comment you confirm that you have read and accept our Posting Rules and Terms of Use.
Advertisement
RELATED ARTICLES
Watch: Repair Work Moves Ahead at Oroville Dam Site
Hardening the Infrastructure: Flood-Management Controls
Work Starts on $200m Dam Strengthening Project
Judge Kicks TVA's Ash
Highest Dam in the U.S. Faces Threat
Advertisement