The desalination device consists of a titanium nitride oxide coating capable of absorbing solar energy applied to a porous floating paper and foam structure by magnetron sputtering. These sections are separated by a polyethylene foam insulation layer that has many air-filled pores that trap heat and allow the multi-layer unit to float on top of a reservoir of seawater, minimizing heat loss to the surroundings.

Under solar irradiation, the water drawn through the substrate is brought into contact with the heated titanium layer and vaporized. By placing the unit in a transparent container with a sloped quartz roof, the water vapor can be condensed and collected as freshwater. 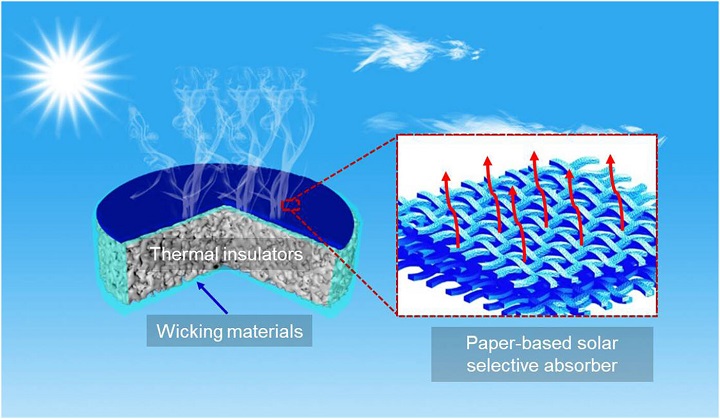 The solar desalination system demonstrated a high evaporation rate of 1.33 kg/m-2/hour under 1 sun illumination (1 kW/m2). When integrated with a commercial solar still, the titanium nitride oxide solar absorber delivered a solar-to-water efficiency of 46% under 1 sun illumination requirements. While seawater averages over 75,000 mg/liter of salt, the desalination unit described in AIP Advances was able to reduce the salinity level to less than 2 mg/liter.

Re: Efficient desalination system is solar-driven
#1