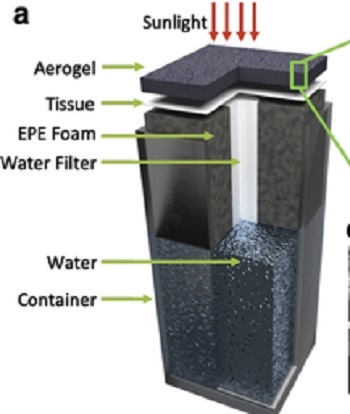 Schematic diagram of a typical solar steam generation device. Source: Shaobo Han et al.water purification systems. However, the high cost of solar conversion and evaporator components remains a barrier to the wider deployment of this route to augmenting freshwater supplies. An inexpensive steam generator assembled with sustainable materials was engineered by researchers in Sweden to broaden access to desalination technology and potable water resources.

The solar steam generator uses an organic conjugated polymer — PEDOT:PSS — for photothermal conversion and a nanofibrillated cellulose-based aerogel scaffold as the solar absorber and water evaporator. Buoyancy and thermal insulation are provided by an expanded polyethylene foam.

The porous aerogel allows water to penetrate into the solar absorber and provides a large specific surface area for water evaporation. An experimental system using a 2 mm thick layer of the aerogel was demonstrated to absorb over 99% of the energy in the solar spectrum and to sustain a high evaporation rate of up to 1.61 kg/m2/hour.

When applied to saline water samples, the process yielded salinity levels within guidelines for good quality drinking water. Salts and other impurities are trapped in the aerogel, which can be cleaned and reused multiple times.

Researchers from KTH Royal Institute of Technology and Linköping University contributed to this study, which is published in Advanced Sustainable Systems.