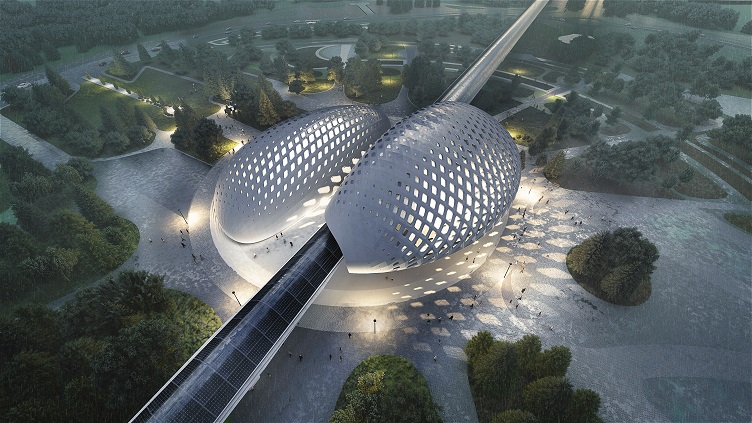 HyperloopTT has unveiled designs for what it claims is the first completed full-scale commercial hyperloop system.

The company said the system would be one of the most sustainable structures ever built and the design will help HyperloopTT begin building and certifying the first hyperloop systems anywhere in the world.

The system will use renewable energy and potentially could generate more power than it consumes, HyperloopTT said. Additionally, a recent study said a hyperloop system that connects Chicago, Cleveland and Pittsburgh would potentially reduce CO2 emissions in the region by 143 million tons.

“The HyperloopTT system is inherently sustainable and operates with zero emissions,” said Andres De Leon, CEO of HyperloopTT. “We have pioneered a technology that is faster, safer, and far cleaner than existing modes of transportation by design. Because hyperloop uses less energy than alternatives, we are a smarter economic solution for many regions worldwide. With these first of their kind, complete commercial designs, we are ready to build today.”

Hyperloop technology uses magnetic levitation to lift the pod off the track and guide it as it moves, creating a friction-free track. Almost all the air in the tube surrounding the pod is removed to create the same environment found at 200,000 ft above sea level. The combination of the linear motor, magnetic levitation and low-pressure tube reduces drag so that only a small amount of electricity is needed to propel the pod at speeds as high as 670 miles per hour. This creates a more cost-effective system than high-speed rail or airline transportation.

An artist’s rendering of a hyperloop center where passengers will board a pod and travel to another location. Source: HyperloopTT

HyperloopTT’s commercial systems feature in-line stations for passengers and function as an on-demand high-speed waypoint for regional connectivity. The station can accommodate high passenger traffic volumes and creates a highly efficient transportation system that can be expanded locally, nationally and globally.

The system and mainline structures are covered with solar panels that adjust with shifting daylight to capture renewable energy and move with the sun to harness clean energy without fossil-fuel-powered grids. The energy systems integrate with the HyperloopTT transportation infrastructure’s energy collection, storage and transfer system to send and receive energy across long distances.

Last month, HyperloopTT unveiled its safety isolation vacuum tube valves that will isolate sections of the hyperloop system tubes to allow for easier system pressurization for maintenance or emergency. Showing it is inching toward actual implementation of the hyperloop system, last year the company tested its pod with actual passengers.

Combined with my idea of a worldwide electrical grid (there's always wind and sunshine somewhere), this could really revolutionize transportation and electrical power.