Video: Take a ride through a concept hyperloop trip

Virgin has released a concept video showing what it believes will be the future of the so-called fifth mode of transportation — the hyperloop.

While the video is short on details about when a hyperloop will be viable, what technology is being used, where the funding will come from and much more, it gives a peak into the mind of those creating the proposed system.

The concept for Virgin Hyperloop’s future of transportation comes after the company released a video of the first test of its pod system with actual passengers inside. The video shows a step-by-step process through a hyperloop journey as a passenger would enter a portal, board the pod, travel through the system and exit through a separate portal at the destination.

Hyperloop technology uses magnetic levitation to lift a pod off the track and guide it as it moves, creating a friction-free track. Almost all the air in the tube surrounding the pod is removed to create the same environment found at 200,000 ft above sea level. The combination of the linear motor, magnetic levitation and low-pressure tube reduces drag so that only a small amount of electricity is needed to propel the pod at speeds as high as 670 mph. This could possibly create a more cost-effective system than high-speed rail or airline transportation.

This would allow for a trip from Los Angeles to San Francisco in under 45 minutes or from Stockholm, Sweden, to Helsinki, Finland, in about 30 minutes.

“Virgin Hyperloop can accelerate the future of mobility on land. The new mode of travel at supersonic speed rethinks transportation and the perception of space, landscape, time, and distance,” said Bjarke Ingels, founder and creative director, Bjarke Ingels Group (BIG), an architecture design house. “In this day and age, Virgin Hyperloop taking off from our portals provides holistic, intelligent transportation for a globalized community to travel across vast distances in a safer, cleaner, easier, and faster way than airlines.”

Virgin worked with BIG for the portal designs in the concept video, Teague for the pod designs, SeeThree for the video and animation and Man Made Music for the score. Virgin said it researched and incorporated findings from non-traditional interactions as well as the typical touchpoints in transportation. 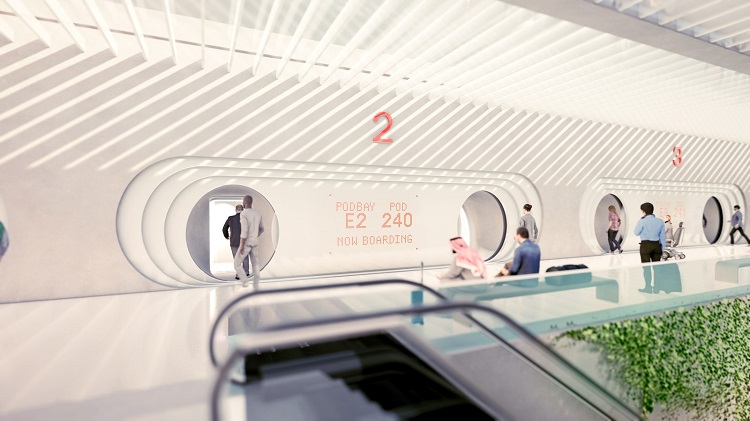 The company said the concept illustrates that the passenger experience is as important as getting the technology right to travel at these high speeds. Additionally, ticket prices will be more akin to the cost of driving rather than flying.

The hyperloop imagined by Virgin would provide both on-demand and direct-to-destination trips with the ability to transport thousands of passengers per hour with each pod capable of carrying up to 28 passengers.

Following the human passenger testing and Virgin’s pledge to build a hyperloop certification center in West Virginia, the company aims to achieve safety certification for its hyperloop by 2025 with commercial operations similar to those depicted in the video beginning in 2030.

Virgin Hyperloop is not the only company developing hyperloop technology. Numerous universities, corporations and startups are working on the technology including Hyperloop TT, Magway, TransPod and others. SpaceX, which is credited for beginning the hyperloop movement, has been working with academies to test and develop hyperloop technologies for future deployment since 2010.

In July of 2020, the House of Representatives passed the Moving Forward Act that would authorize the Nontraditional and Emerging Transportation Technology Council (NETT) of the Department of Transportation to provide “guidance for a clear regulatory framework for the safe deployment of hyperloop transportation.”

By posting a comment you confirm that you have read and accept our Posting Rules and Terms of Use.
Advertisement
RELATED ARTICLES
Video: Virgin tests hyperloop with actual passengers
Virgin Hyperloop partners to build commercial hyperloop
Is the hyperloop about to go mainstream?
Hyperloop Reaches 192 mph in Phase 2 Testing
Virgin Hyperloop One to build 35 km test track in Saudi Arabia
Advertisement