Researchers from the University of California Riverside set out to explore the microbiome’s role in a disease that has been plaguing the citrus industry.

Huanglongbing (HLB) is a citrus greening disease and it has been one of the most destructive diseases the citrus industry has ever seen. It has reduced the Florida citrus industry’s juice production and other products by 72%. Candidatus Liberibacter asiaticus (CLas) is a microbe associated with HLB. CLas lives in the phloem of a tree and is transmitted by insects during feeding. 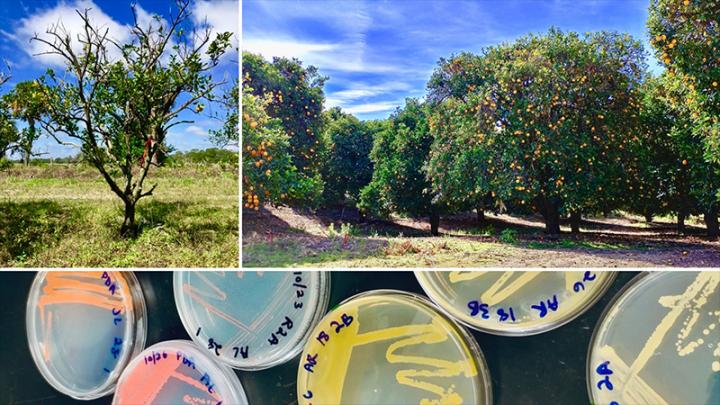 HLB symptoms start out as blotchy leaves, yellow shoots and stunting and can progress to a decline in product yield, poor quality fruit and eventually plant death. Currently, the only thing that growers can do to protect against HLB is to control the insect vector.

In the plant disease management world, plant microbiomes a new frontier. The team created a new way to study plant microbiome interactions and they captured several snapshots of three tissue types (roots, stem and leaves) over three years. They used amplicon (16S and ITS) sequencing to capture the role of the microbiome over HLB progression.

The team found that HLB sparks a shift in a tree’s microbiome. As the disease progresses, microbial diversity increases. Upon further investigation, they found that the increase in diversity was associated with an increase in putative pathogenic and saprophytic microbes. There is is significant drop in beneficial microbes in the early phase of the disease. Depletion of key microbial species during the disease could be an open door for more microbes to invade. As resources become more or less available, it allows different microbes to thrive. The team’s hypothesis is when HLB starts, the depletion event triggers beneficial microbes to rush to the citrus tree's aid. They suspect that microbes are initiating an immune response. As the disease continues, the tree and microbiome continue to charge at the disease.

The team also observed enrichment of parasitic and saprophytic microorganisms in severely diseased roots. Enrichment of microbes may contribute to disease progression and root decline. They also found that trees that survived HLB had unique microbial profiles enriched with punative symbiotic microbes. This led researchers to identify certain microbes that were associated with slowed disease progression.

Researchers hope that this study would be the foundation for other projects on plant microbiomes and that the findings can be used to establish a microbiome meditated treatment to protect crops from disease.

The study was published in Phytobiomes Journal.

By posting a comment you confirm that you have read and accept our Posting Rules and Terms of Use.
Advertisement
RELATED ARTICLES
Climate change threatens kelp forests
What Gorilla Poop Tells Us About Human Health and How We’ve Evolved
Wanted: A 'Noah's Ark' Biobank for Microbial Diversity
Using microbes to clean produced water
Researchers study microbiome of Da Vinici drawings
Advertisement