An extrusion-based 3D printing technique was developed by researchers from the University of Minnesota and the U.S. Army Combat Capabilities Development Command Soldier Center (Natick, Massachusetts) to directly align and print microfluidic structures onto planar and curved surfaces. The technique holds promise for synthesizing fluid channels at the micron scale for automated production of medical diagnostic and sensor systems. 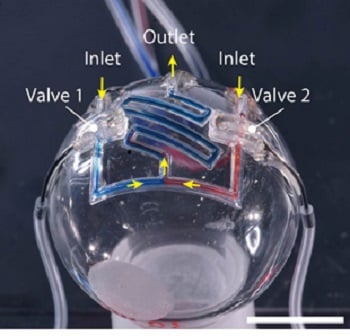 The capacity to print microfluidic channels outside of a cleanroom setting could provide for robotic-based automation and portability in producing these devices. In addition to printing microfluidics directly onto a curved surface, the researchers integrated them with electronic sensors for lab-on-a-chip sensing capabilities. Encapsulating the microfluidic channels with ultraviolet-curable resins imparted sufficient mechanical strength to enable automation components including microfluidic valves and pumps.

The researchers hope that the methodology described in Science Advances can be extended to freeform surfaces such as human skin for directly 3D printed physiological sensors.

By posting a comment you confirm that you have read and accept our Posting Rules and Terms of Use.
Advertisement
RELATED ARTICLES
Microcontact Printing Update for Microfluidic Assays
Watch 3D Bioprinting with In-air Microfluidics
The Lab-on-Chip Revolution: Finding the Right Niche
Video: Using Lego Bricks to Move Beyond the Lab-on-a-Chip
Using Light to Manipulate Water May Open Door to New Microfluidic Diagnostic Devices
Advertisement