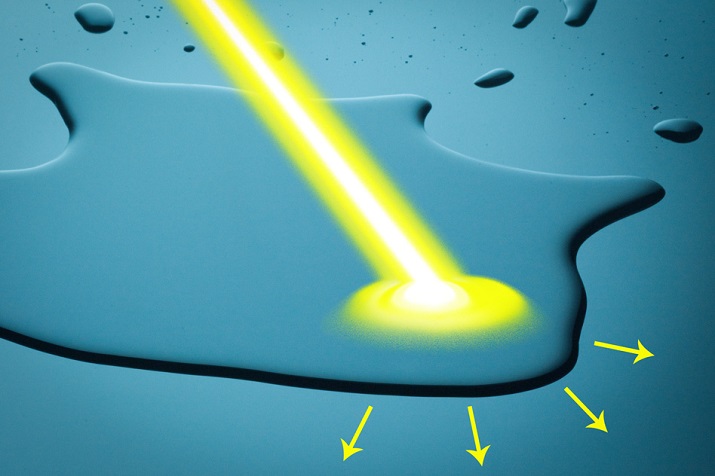 The process could be used to develop microfluidic diagnostic devices in which channels and valves could be reprogrammed on the fly, or field systems that could separate water from oil at a drilling rig.

The goal of the project was to find ways to separate oil from water in certain oil wells. The more these liquids are intermingled, the harder they are to separate. Often electrostatic methods are used but these consume vast amounts of energy and don’t work well in water with a high amount of saline.

Instead, researchers used photoresponsive surfaces where water can be altered by exposure to light. Creating surfaces in water activated by light allowed the team to directly separate the oil from the water by causing individual droplets of water to coalesce and spread across the surface. The more the water droplets fuse together, the more they separate from the oil, researchers say.

Photoresponsive materials have been studied and used in the past — titanium dioxide, or titania, is the active ingredient in most sunscreens — but only react to ultraviolet light, not seen by the eye. MIT figured out a way to treat the titania surface to make it responsive to visible light.

First, MIT researchers used a layer-by-layer deposition technique to build up a film of polymer-bound titania particles on a layer of glass. They then dip-coated the material in an organic dye resulting in the surface being highly responsible to visible light. When exposed to sunlight, the material is much greater than that of the titania itself and provided a demulsifying of the oil-water mixture.

“We were inspired by the work in photovoltaics, where dye sensitization was used to improve the efficiency of absorption of solar radiation,” said Kripa Varansi, MIT associate professor of mechanical engineering at MIT. “The coupling of the dye to titania particles allows for the generation of charge carriers upon light illumination. This creates an electric potential difference to be established between the surface and the liquid upon illumination, and leads to a change in the wetting properties.”

The same effect could also be used to drive droplets of water across a surface. By changing the materials ability to move across a beam of light, it can be directed toward areas with greater precision, researchers say. Such systems could be used to make microfluidic devices without built-in boundaries or structures such as a blood sample in a diagnostic lab-on-a-chip controlled via the pattern of illumination projected onto it.

Other uses could include self-cleaning devices that repeal water or surfaces that carry water off with any contaminants that may have been built-up.

The full study has been published in the Nature Communications Journal.

By posting a comment you confirm that you have read and accept our Posting Rules and Terms of Use.
Advertisement
RELATED ARTICLES
Papaya enzyme makes for an organic solar cell
Printing Perovskite Solar Cells on a Large Scale
New photocatalyst effectively tackles air pollutants
Hydrogel That Doesn't Dry Out Could Be Used for Artificial Skin
Photocatalytic Material Effectively Removes Dye Pollutants
Advertisement