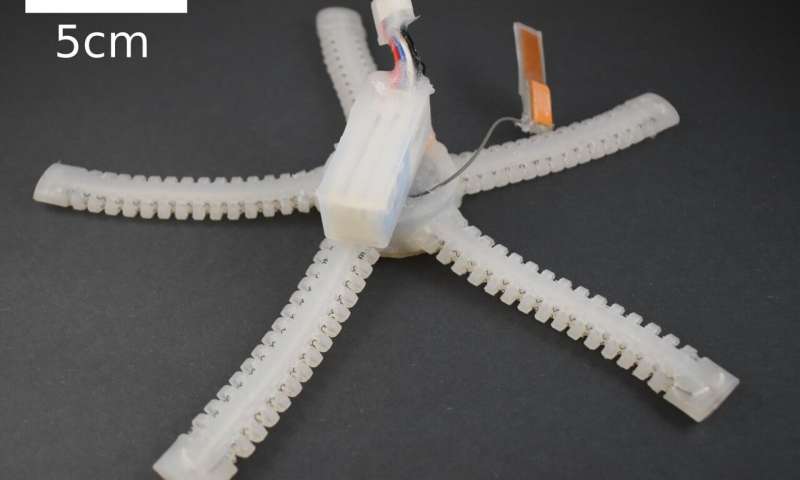 Source: Patterson et al. A team from Carnegie Mellon University has developed a soft, untethered underwater robot that mimics the shape and behavior of the brittle star, a relative of the star fish.

Dubbed Patrick, the underwater robot is composed of flexible and waterproof silicone and it includes five limbs that are powered by shape memory alloy (SMA) — a highly flexible metal — coils. These shape-changing coils behave like muscles, enabling Patrick to crawl underwater and to deform and change shape in response to disturbances.

Additionally, Patrick can sense its surroundings and communicates wirelessly with other devices while submerged underwater.

Patrick’s developers believe that the robot could be used for ecological sampling and geological exploration applications.

To see Patrick in motion, watch the accompanying video that appears courtesy of Carnegie Mellon University.

A paper detailing the robot is published in arXiv.

By posting a comment you confirm that you have read and accept our Posting Rules and Terms of Use.
Advertisement
RELATED ARTICLES
Watch a snake-bot swim through hoops
Marines deploy robot in underwater explosives detonation
Watch an underwater robot mimic squid
ARM to award $5.7 million in project funding
Material Softens to Change Shape, Hardens to Stiffen
Advertisement