The Norwegian Automobile Federation recently road-tested 20 of the best-selling battery-electric vehicles (EVs) in the country to gauge how winter weather affects their range and charging times.

The EVs selected, including the Nissan Leaf, Tesla Models S, 3 and X, Hyundai Kona and Audi E-Tron, covered the same mix of city, highway and country-road driving at speeds ranging from 37 mph to 68 mph, and were operated until they stopped completely and shut down. Climate controls were set to heat the cabins to nearly 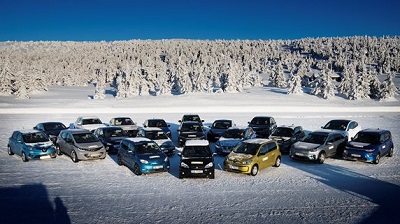 On average, the EVs lost 18.5% of their official driving range as determined by the European World Light Vehicle Test Procedure (WLTP), which is conducted in summer, and charging was noticeably slower. The top performer was the Hyundai Kona, which lost only 9% of its official range, which the WLTP rated at 449 km (279 miles) and traveled 405 km. The Tesla Model 3 delivered 404 km while the Tesla Model S lost 23% of its range. The Opel Ampera-e, also known as the Chevrolet Bolt, proved the worst performer, traveling 297 km (about 184 miles) or 30% lower than its stated WLTP range.

Charging tests were performed after at least two hours of highway driving, so the batteries were warm and more optimal for charging, with no waiting in line. Researchers charged them from no more than 10% capacity to 80%. The Opel Ampera-e again fared worst, along with the Renault Zoe. The Opel claims the ability to charge to 150 km (93 miles) of range in 30 minutes, but delivered only 79 km, or 49 miles, in that time. By contrast, the Audi E-Tron 55 quattro charged to 80% in just 27 minutes and held a steady charging curve.

The researchers observed that drivers experience a loss of acceleration and caps on the maximum speed as the battery is drained. If the vehicle is shut down at this point for up to an hour, enough power will be available to drive a few more kilometers, hopefully to get home or to a charging station.

By posting a comment you confirm that you have read and accept our Posting Rules and Terms of Use.
Advertisement
RELATED ARTICLES
Porsche and Audi Challenge Tesla
Study offers insight into EV charging habits
Battery swapping service to make EVs cheaper
Audi to Introduce Electric SUV in 2018
Global LEV Markets Are on the Rise
Advertisement