Global LEV Markets Are on the Rise

Air pollution and vehicles were first associated in the early 1950s by a California researcher who stated that traffic was to blame for the smoggy skies over Los Angeles. This was the start of the transformation coming to the automotive industry.

Over time, emissions from other mobile sources of air pollution, such as heavy-duty trucks, agricultural and construction equipment, locomotives, garden equipment and marine engines, were also being considered. Today, controlling emissions involves technological advances in engine design to higher quality or alternative fuels, and the production of greener cars with the collaboration of local governments and car manufacturers.

A recent report from the European Commission revealed that 12% of the overall EU emissions of carbon dioxide (CO2), comes from the fuel consumed by passenger cars. To lower CO2 emissions, car makers are introducing vehicles tailored to a range of specific uses, from short urban commutes to long-distance cargo hauling, with the possibility of being energized by alternative fuels, such as biofuels, electricity, hydrogen, natural gas and propane. 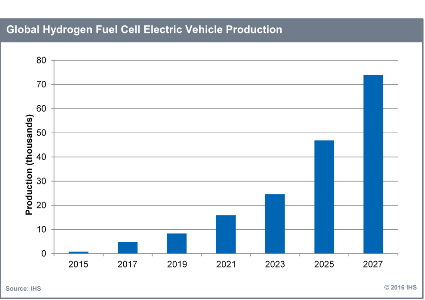 (Click to enlarge.) The key market driver for the rise of low emission vehicles around the world is government regulation, says Devin Lindsay of IHS.Production of global hydrogen fuel cell electric vehicles is expected to reach more than 70,000 vehicles annually by 2027, as more automotive OEMs bring these vehicles to market, says a May 2016 report from IHS Automotive.

“The key market driver for the rise of low emission vehicles around the world is government regulation,” says Devin Lindsay, IHS principal analyst. “This, however, is in response to the need to reduce CO2 emissions in their respective regions.”

For instance, in Europe, the Euro 6c regulation is putting pressure on car manufacturers to perform real driving emissions (RDE) tests in order to ensure that a specified level of emissions has not been exceeded. This regulation is set to be effective from 2017.

The low emission vehicles market is broadly segmented according to battery type, vehicle type, and geography with steady progress in European and North American countries.

Globally, all regions are expected to increase the number of hybrid and electric vehicles on the road, according to Lindsay. He says there could be an increase in the number of hydrogen fuel cell vehicles as well, provided the technology continues to mature at the current rate. 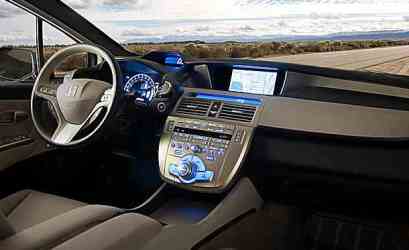 Interior of the Honda FXC Clarity. Hyundai released its first mass-produced fuel cell vehicle in 2015, and several car manufacturers have subsequently announced production plans in their vehicle lineups. Toyota, for instance, plans to release the Mirai in 2016. The vehicle is a midsize four-passenger zero-emission sedan that uses a hydrogen fuel cell system with the ability to travel up to 300 miles on a full tank. Honda announced the release of its FCX Clarity fuel cell vehicle. And Mercedes confirmed plans to release a hydrogen-powered GLC using a new fuel cell stack design in 2017.

Starting in Europe, 48-volt mild hybrid vehicles are expected to have a dominant position in the powertrain landscape, according to Lindsay. He says that in Europe, the United States and China, plug-in hybrids are expected to increase as many current non-plug-in models make the transition to a plug post-2020.

Automakers continue to offer plug-in vehicles for model-year 2016; brands such as Mercedes (S500), Audi (A3 E-tron), BMW (X5 xDrive 40e) and the Hyundai Sonata are introducing new plug-in hybrid vehicles. By combining the range and power of an internal combustion engine and the torque of an electric motor, a PHEV can deliver comparable performance with lower fuel consumption and lesser emissions than a gasoline engine.

Tesla announced the 2016 Model X all-wheel drive electric crossover with a range of 220 miles that the company says can be stretched to 257 miles with an optional 90 kWh battery. Model X is being marketed as one of the safest, fastest and most capable sport utility vehicles.

One of the biggest challenges facing vehicle adoption is customer acceptance, says Lindsay. Hybrid electric vehicles require consumers to change how they interact with the car that many have known and driven for decades. The higher the level of electrification on the vehicle, the more changes required for the consumer. This will not be easy, he says, especially when the technology struggles to find success in the most popular vehicle segments. 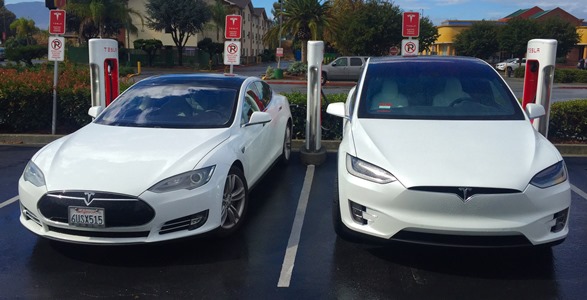 The Tesla Model S (left) and Model X (right) share the same platform. Encouragingly, however, the infrastructure for PHEV and BEV charging is steadily increasing, especially in the United States. One question is whether the right type of charging exists for the PHEV/BEV customer. According to Lindsay, an owner of the technology may be able to charge at home, but not at the workplace. This may be an issue if the workplace was at the outer limits of the vehicle’s range and/or if the owner needed to drive elsewhere besides work. As a result, having a sufficient number of chargers for people in various living conditions is vital.

By contrast, filling a hydrogen vehicle may require no more time than it currently does to fill a gasoline or diesel vehicle. However, the shortage of public hydrogen filling stations limits adoption of this technology.

The United States has experienced a move toward larger vehicles and increased vehicle-miles-travelled (VMT) according to Lindsay. He says that while hybrid vehicle sales are down, this doesn’t necessarily mean that customers are rejecting the technology.

The underlying issue may be that the technology is not featured in many of the CUVs, SUVs, and pick-up trucks that Americans are choosing to drive. Therefore, legislative targets in the country, such as CAFE (Corporate Average Fuel Economy) and ZEV (Zero Emission Vehicles mandate) may be needed to push automakers into making hybrid/electric vehicles more available on the dealership lots, even in a low-oil-price environment. “If those vehicles begin to replace traditional internal combustion engine offerings, consumers will have no choice but to purchase the vehicles,” says Lindsay.

When it comes to buying a new vehicle, consumers typically evaluate car models according to usage, budget, and green scores. The U.S. Environmental Protection Agency (EPA) created a green vehicle guide intended to make it easier for consumers to find green cars. In general, the greenest vehicles will have either the EPA SmartWay Elite or SmartWay designations. Outside of the U.S., governments are encouraging the usage of green cars by introducing a range of schemes. For instance, in Leeds, United Kingdom, the city council is allowing all residents to park their ultra-low emission vehicles for free until March 2017.

Lastly, there is always a way to use a greener fuel source without having to buy a completely new car. For instance, biofuels are legal in several countries and can often be used in some diesel car models.

By posting a comment you confirm that you have read and accept our Posting Rules and Terms of Use.
Advertisement
RELATED ARTICLES
Low-Emission Vehicles Are Less Costly
Dual-Fuel Garbage Trucks to Showcase Hydrogen's Transport Potential
Hydrogen Fuel Cell Vehicles Are the Future, Hyundai Says
Vehicles' Carbon Footprints Vary by Region
Will the FCEV Ever Go Mainstream?
Advertisement