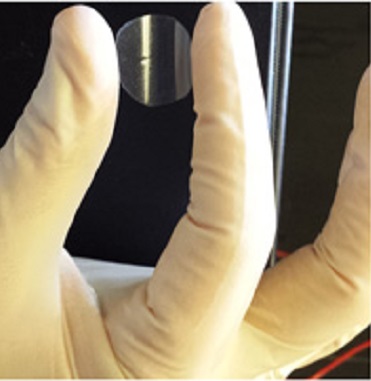 Prototype unit dose film. Source: Irnela Bajrovic et al.refrigerating these live strain-containing medicines. A novel storage and delivery technology devised at the University of Texas preserves these biological elements in a lightweight film without the need for refrigeration and could cost-effectively expand global access to vaccines.

The vaccines are suspended and sealed within the peelable thin films in units which are about one-thousandth the size of traditional vaccine vials. The films dissolve rapidly after oral administration and were demonstrated to be effective delivery devices for Ebola and influenza A vaccines in proof of concept tests.

One formulation consisting of an optimized combination of base, sorbitol and surfactant stabilized adenovirus for a period of three years at room temperature. When reconstituted and given via the respiratory route to primates in the laboratory, this formulation offered full protection from a lethal dose of Ebola. The delivery platform was also shown to be capable of preserving live bacteria at room temperature for eight months with minimal loss of viability upon reconstitution.

The film matrix described in Science Advances could provide an effective delivery method for diverse vaccines, including future treatments that target the coronavirus.

By posting a comment you confirm that you have read and accept our Posting Rules and Terms of Use.
Re: New vaccine delivery method negates the need for refrigeration
#1