Engineering safety and performance into the lithium ion battery

The safety of li-ion batteries has improved with the use of aqueous electrolytes, which reduce flammability risk. However, these substitutes incur a performance cost in terms of a reduced electrochemical stability window and lower energy and power densities relative to batteries with organic electrolytes. By 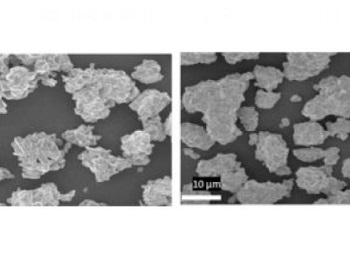 Niobium tungsten oxide particles constitute the battery anode. Source: Rensselaer Polytechnic Instituteoptimizing material combinations for electrodes as well as the electrolyte, battery safety and performance can both be realized.

Researchers from Lawrence Berkeley National Laboratory and Rensselaer Polytechnic Institute tested niobium tungsten oxide anodes and lithium manganese oxide cathodes with water-in-salt electrolytes. The battery system demonstrated volumetric energy and power density greater than that documented for traditional aqueous li-ion batteries. The performance efficiency gains are attributed to the dense packing of niobium tungsten oxide particles in the anode and to the abundance of tunnels within the particles that allow fast diffusion of lithium ions and fast charging.

The battery design could offer an alternative to traditional power supplies in applications where high volumetric energy and power density are desired, such as portable electronics and electric vehicles.

By posting a comment you confirm that you have read and accept our Posting Rules and Terms of Use.
Advertisement
RELATED ARTICLES
Battery systems and the need for their optimization
A solid approach to safer lithium-ion batteries
A Salty Solution for Safer Batteries
The Search for a Better Li-Ion Battery
Watch: Aqueous Storage System Charges in 30 Seconds
Advertisement