Early detection of toxins released by algal blooms can help water treatment plants adjust treatment protocols to keep these dangerous substances from contaminating drinking water. Rapid detection would alert water treatment plants to the presence of the toxins before the water enters a water facility, where conventional treatment systems are often inadequate in removing cyanotoxins. An electrochemical aptamer-based sensor that detects and measures microcystin cyanotoxin in water was designed by University of Cincinnati and U.S. Environmental Protection Agency researchers to aid this process.

Using water samples taken from Lake Erie and other Ohio bodies of water, the researchers employed the 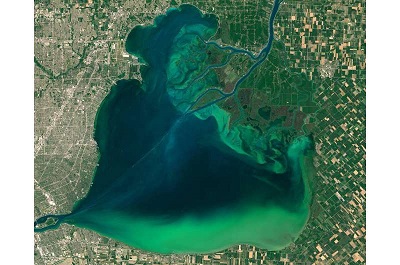 A satellite image of algal blooms on Lake Erie. Source: NASA sensor to successfully detect and measure the amount of a specific type of microcystin commonly found in the region. The system uses hexaammineruthenium(III) chloride as redox mediator and demonstrated a suppression in faradaic current on exposure to mycotoxins in water samples.

The results reported in ACS ES&T Engineering indicate a sensor with potential for fast and specific quantitative determination of cyanotoxins in drinking water samples. The researchers plan to expand the types of toxins the sensor can detect and create a prototype device to be used in the field.