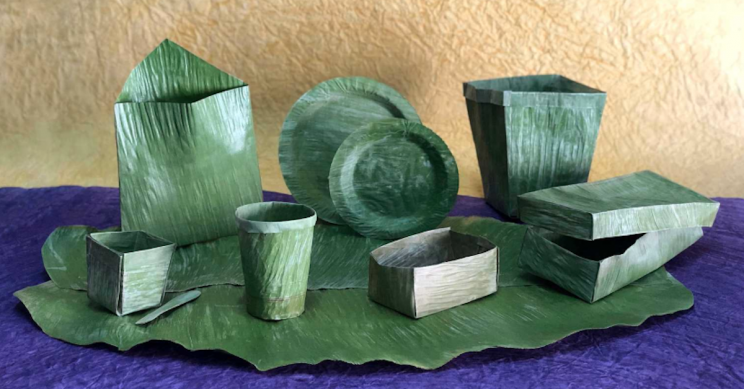 Tenith Innovations, led by Indian inventor Tenith Adithyaa, has devised a biomaterial that is a suitable alternative for single-use products such as cups, plates, food containers and other food packaging and wrapping.

To accomplish this, Adithyaa developed what is called Banana Leaf Technology wherein ecofriendly, cellular tech preserves banana leaves for approximately one year without the addition of harmful chemicals. Instead, the technology reinforces the cell walls of the banana leaves, which effectively halts the aging process of the leaves. Likewise, the physical properties of the banana leaves are fortified with the addition of the natural strengthening additive.

Once fortified, the leaves can be sculpted into shapes for boxes, cups, plates, envelopes and other common single-use products. Upon completion, the products are biodegradable, durable, capable of carrying more weight and resistant to temperature extremes.

Biomaterial, such as that derived from banana leaves, tends to degrade within just a few days, often making it an inappropriate substitute for plastic packaging and other single-use items. However, the Banana Leaf Technology prolongs the shelf life of the banana leaf products to as much as three years, with the banana leaves losing their color after one year.

In different regions of the world, it is not uncommon for banana leaves to be used as an alternative for single-use plastics such as food packaging. A grocery store chain in Thailand is now packaging its produce in banana leaves to reduce the amount of plastic packaging in use in that country. This follows a trend taking place all over the world where innovators, well-established companies and scholars alike are looking for alternatives to solve the plastic packaging crisis that is overwhelming the world’s oceans and landfills and entering the food chain.

As such, companies like whisky-maker Glenlivet are exploring packaging alternatives, partnering with packaging startup Notpla to manufacture edible whisky capsules composed of seaweed. Meanwhile, a startup based in Mexico is turning avocado pits into biodegradable cutlery while a team from the University of Georgia is attempting to develop biodegradable straws.

By posting a comment you confirm that you have read and accept our Posting Rules and Terms of Use.
Re: Innovator develops technology for turning banana leaves into single-use packaging
#1

Are they just strengthening the leaves so we can wrap things with them, or is there a solid material made that can be extruded or otherwise formed into shippable, sealable packages? Purified cellulose goes back to cellophane and rayon, had its day as a packaging film, sealable with PE coating, not used much now (cigar wrap).