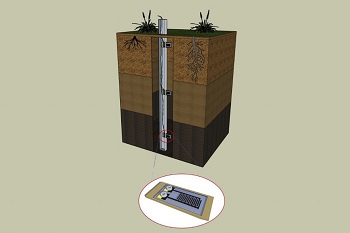 A 10-month field test compared the performance of the millimeter-sized soil moisture sensors, assembled by thermal press technology on thin compact discs, with that of available capacitance-type sensors. The new devices demonstrated a prompt response to sharp changes of soil moisture during water shock tests. Soil moisture profiles collected from these sensors were shown to record the spatiotemporal variation of soil moisture, which enabled simultaneous profiling at multiple locations.

Large numbers of the low-cost and accurate soil moisture sensors can be installed in fields to achieve high-resolution profiling for water-saving irrigation. The researchers plan to apply similar technology to the design of nitrogen sensors for use in optimizing field fertilization.

By posting a comment you confirm that you have read and accept our Posting Rules and Terms of Use.
Advertisement
RELATED ARTICLES
Radar Used to Measure Moisture Levels in Soil and More
Watch how atmospheric water can be tapped for crop irrigation
IoT Down on the Farm
New Portable Field Sensor Accurately Measures Harmful Minerals in Soil
The effect of deficit irrigation on greenhouse tomato yield
Advertisement