IoT Down on the Farm

The Internet of Things isn’t just moving into the factory. It’s finding a home on the farm as well.

Agricultural IoT systems make use of sensing, connectivity, and analytics to increase farm yields and/or reduce inputs such as water, pesticides, and fertilizers, according to Laura Lee, a research associate at Boston-based Lux Research Inc., a research and advisory firm that published a report on the subject in 2016.

The sensing elements of these systems can be soil sensors put in the ground to measure moisture content, nutrient levels, or pH, as well as drones and satellites that image fields from above to harvest crop data.

As for connectivity, technologies include Wi-Fi, cellular connections, mesh networks, and low-power wide area networks. Designed for machine-to-machine networking, LPWANs are well-suited for fields because of their low power consumption and wide coverage range, Lee says. 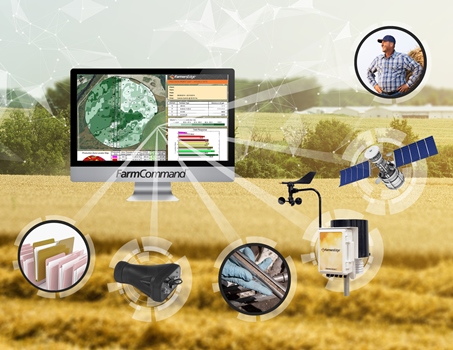 According to Lee, the most widely used agricultural IoT technology is variable rate (VR) fertilization. On a field divided into a chessboard of individual squares, some squares are more nutrient-deficient than others. VR technology allows farmers to vary application of fertilizers according to the nutrient level in each square.

To determine crop nutrient levels, IoT systems can use images taken by satellites or drones, as well as ground sensors pulled across fields by tractors. Data from these sources is sent to a cloud service that performs the necessary analytics and then sends variable-rate prescriptions to the farmer’s field machinery, which tailors its fertilizer application accordingly.

In the U.S., Lee estimates that several million acres may be farmed using some form of “precision agriculture” system that relies on information technology. But she believes many growers have been reluctant to adopt these systems due to their cost and uncertainty about their return on investment.

“I think very few ‘precision ag’ developers have been able to prove an ROI,” she says. “Many systems can detect the smallest details about a plant’s growth. But a huge amount of data is just data until you can actually deliver an insight from it.”

She says that many solutions “are just aggregating and spitting out numbers” without giving growers decision support for issues such as when or how much they should irrigate.

One system that aims to provide just this kind of decision support is offered by San Diego, Calif.-based AquaSpy Inc. Its system features a probe that measures soil moisture and temperature, as well as electrical conductivity, which correlates with soil properties that affect crop productivity.

In essence a complex capacitance meter, the probe sends a signal into the soil, which is reflected back and sent to a demodulator that calculates the signal’s attenuation and phase shift. With this information, the system can determine the soil’s moisture level and conductivity.

AquaSpy’s probe is connected to a telemetry unit that includes a micro controller and a cellular modem. The system aggregates probe measurements for one hour, then uploads the data to a cloud-based server for analysis.

The battery-powered system is entirely automated and constantly adjusts itself, says to Peter Elleegaard, AquaSpy’s vice president of engineering. “All the user needs to do is put the probe in the ground and tell the system what crop it is and when it was planted,” he says.

Once operational, the system monitors daily water consumption and tells growers how much water is available in a given area, how rapidly plants are consuming water, and how many days are left before irrigation will be necessary. Growers can log in to the system to see the most current information on a web page. They also can configure the system to send alerts telling them when they need to take certain actions. 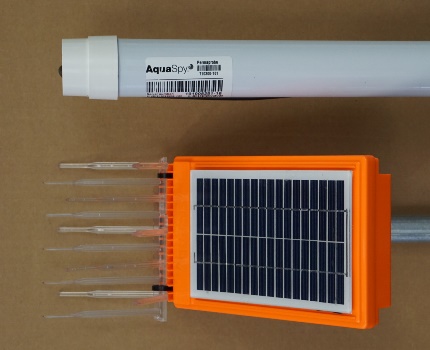 Featuring a probe (right) and communications tower, AquaSpy’s system gathers and transmits crop data. Credit: AquaSpyFarmers buy AquaSpy’s hardware at cost and also buy a yearly subscription for the data itself. Currently, the company has about 4,000 installations, mostly in the Midwestern U.S. Others are located in the Mississippi River Delta and the coastal U.S., as well as in Russia, Ukraine, Kazakhstan, Africa, South America, and Australia.

What results are users getting? “Our growers are seeing yield increases of between 10% and 40%,” Elleegaard says.

Generally speaking, those in the business of providing data to farmers “have been headed toward decision support, and we’re one of the leaders in that area,” says Ron Osborne, vice president of business development for Farmers Edge Inc., based in Winnipeg, Canada, and Shakopee, Minn. Farmers Edge combines market information—the price of commodities, chemicals, and so on.—with remote sensing technologies that help growers understand what’s happening with their crop.

Technologies used by the firm include:

•Advanced satellite imagery. This is gathered on “a high frequency basis” for spectral analysis of the chlorophyll and photosynthetic activity in plants, Osborne says. Farmers Edge uses 2 billion acres of high-resolution satellite imagery every year in all major agricultural markets around the world.

•Weather sensors. Osborne says the company puts weather stations in the fields of every customer. Data includes the amount of rainfall on a particular field, as well as temperature, barometric pressure, and wind speed.

•Sensors on farm machines. Among other things, sensors can tell farmers how accurately a machine is planting and how much herbicide was sprayed on a particular field.

Farmers Edge vertically integrates all these sensors, along with cellular networking and other technologies, into a tool kit for decision support.

But with all this data pouring into the system, are farmers at risk of information overload?

“The trick is to make sure you’re not communicating an overwhelming amount of data, but instead analytics and knowledge,” Osborne says. Farmers Edge delivers this via a web site called Farm Command, which consolidates information provided to the farmer on a single dashboard.

At the end of the growing season, Farmers Edge produces a profit map showing customers how much money its service made or cost them. About 90% of the time, the results show “a strong ROI compared to what they would ordinarily do on the farm,” Osborne claims, adding that the ROI can range from $5 to $40 per acre.

Besides handling hardware integration and data analysis, Farmers Edge installs its system at customer sites. The idea, Osborne says, is to “simplify precision agriculture so it can be accessible to any farmer.”

By posting a comment you confirm that you have read and accept our Posting Rules and Terms of Use.
Re: IoT Down on the Farm
#1

Just curious, since the data is going to a cloud service and analyzed as the article states etc. Some of this must be customized software primarily for this application.

How much as these farms willing to pay to set up such a network, plus the monthly fees I assume?

Re: IoT Down on the Farm
#2
In reply to #1
George Escoffery

Here at Premier Wireless Solutions, Sunny Vale CA. provides access to our platform for $49.00 per month for hundreds of devices. We currently provide telematics solutions asset tracking, agriculture moisture control, and Vehicle crash impact. Let me know if you have a project you like to discuss.