Watch how atmospheric water can be tapped for crop irrigation

A novel approach to irrigation developed at the University of Texas Austin could bolster the sustainability of agricultural systems confronted with water supply deficits.

Water for irrigation can be harvested from the atmosphere by use of super moisture absorbent gels (SMAG) incorporated into soil. Hydrophilic hydrogels combined with natural sandy soil absorb atmospheric moisture during cool, nighttime periods and release water to soil under solar heat. One gram of SMAG-amended soil can capture about 3 to 4 g of water, and for certain types of crops 0.1 to 1 kg (0.2 to 2.2 lb) of the material can effectively irrigate about 1 m2 of farmland.

The amended soil was observed to retain about 40% of its initial water content during a four-week rooftop test. Only about 20% of the initial water content remained in a control sandy soil. Radishes planted in the SMAG-soil survived for 14 days after being irrigated once at the start of the trial. Plants in the control sandy soil were irrigated during the first four days of the test period but none survived more than two days without additional water input.

In addition to expanding the areal range of sustainable agriculture, the atmospheric water irrigation technology might be used to provide potable water supplies in arid regions or be applied to solar panel and data center cooling. 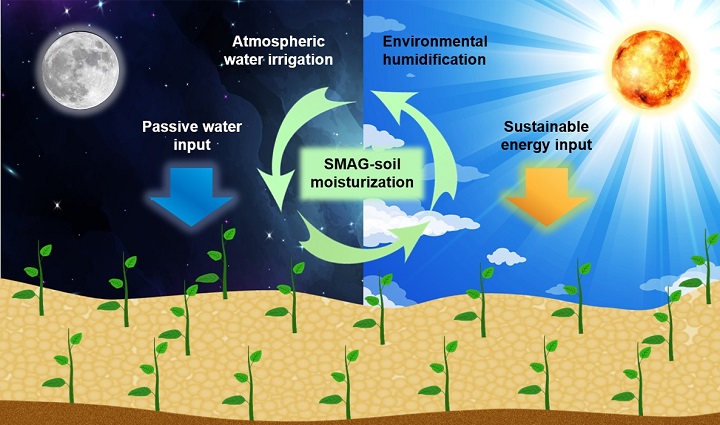 A diagram of the SMAG-soil irrigation process. Source: University of Texas at Austin

By posting a comment you confirm that you have read and accept our Posting Rules and Terms of Use.
Advertisement
RELATED ARTICLES
Small soil-moisture sensor has big impact on water conservation
A greener alternative to plastic mulch
Radar Used to Measure Moisture Levels in Soil and More
The effect of deficit irrigation on greenhouse tomato yield
Weighing the accuracy of global irrigation projections to 2050
Advertisement