Researchers at the Indian Institute of Science Education and Research (IISER) have developed a battery that charges directly from light; the anode itself is made of titanium nitride and ambient light.

Under artificial light, this prototype battery has a capacity of 77.8 mAh/g. Over 100 cycles, the battery retained a bit over 70% of its discharge capacity, 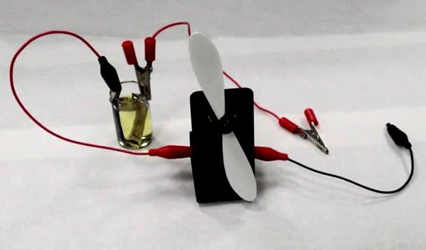 Under artificial light, this prototype battery has a capacity of 77.8 mAh/g. Source: ACS, Image credit: Dr. Musthafa's lab, IISER, Pune which suggests some potential for longevity and usefulness.

In addition to being charged directly by light, the battery design offers what the researchers say is “a sustainable and economical anode material which will not be consumed as a part of the discharge reactions, and an anode material that is free from loss of active materials, irreversible structural deformations, spontaneous de-insertion reactions, and safety concerns commonly encountered in the state of the art anode materials in [aqueous rechargeable batteries].”

According to a press release from the American Chemical Society, “the researchers say their design is a promising first step towards a more sustainable and safer battery technology.”

Defects Could Be Used to Improve Lithium-ion Battery Design

By posting a comment you confirm that you have read and accept our Posting Rules and Terms of Use.
Advertisement
RELATED ARTICLES
Drive range anxiety away with this fast-charging battery
Video: Solid-state battery incorporates silicon anode
A Cost-Effective Alternative to Lithium Batteries
Microwaving plastic waste yields battery components
Scientists determine the cause of failure in lithium-metal batteries
Advertisement