Specifying an Accelerometer: Function and Applications 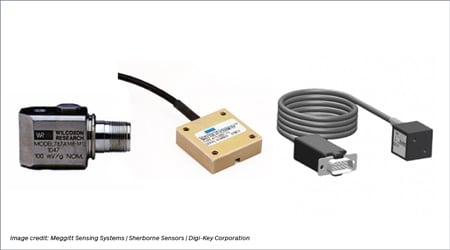 Accelerometers measure proper — also known as g-force — acceleration, which can be simply defined as "acceleration felt as weight." As its alternative terminology implies, proper acceleration is measured in g's. The "g" unit refers to the gravitational constant, which is approximately 32.2 ft/s2 (9.81 m/s2).

(Find accelerometers by specification or see our directory of suppliers.)

While most modern accelerometers use semiconductors and piezoelectric means to measure acceleration, the image below describes the operation of a basic electromechanical linear accelerometer for reference. 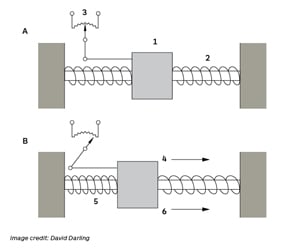 The accelerometer in the image below uses the displacement of a solid mass relative to its container to measure differences in acceleration. In Image A (on the left), the container is at rest and the mass remains centered between two bars; in this state the accelerometer outputs a constant intermediate voltage. If the container accelerates in the direction of the bar to the right (shown in Image B -on the left), the inertia of the mass causes it to lag behind, compressing the spring behind it and stretching the one ahead of it. As this is occurring, the device registers a higher voltage relative to the acceleration measured. Upon deceleration, the mass returns to its resting position and the output voltage correspondingly decreases.

Accelerometers can be constructed in various forms using different technological means. For specific types of accelerometers, please see the 'Sensor Types' section below.

Accelerometers are used in a wide range of applications over a variety of industries. Some example applications are listed below.

Accelerometers are also limited by the range of vibration frequency they can sense, and must be matched to the frequency of the intended application. The most sensitive accelerometers can detect vibration as low as 0.2 Hz, although they are typically inaccurate below frequencies of 10-15 Hz.

The graph below shows a typical frequency-sensitivity curve. The spike which occurs between 10,000 and 50,000 Hz is likely due to the accelerometer's natural frequency, at which point the sensor experiences a large increase in sensitivity, resulting in oversensitivity and possible saturation. Many devices feature filters which correct this oversensitivity. 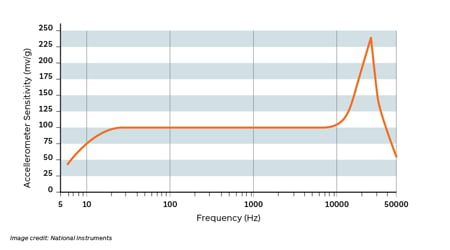 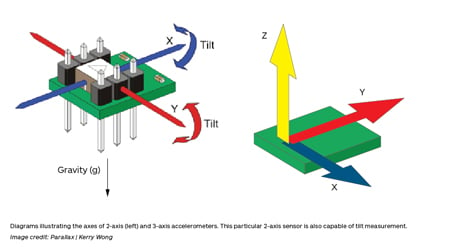 When selecting an accelerometer, it is important to determine the number of axes the device is designed for. 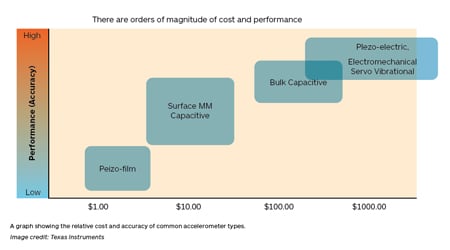 Accelerometers may use one of several technology types to sense and output changes in velocity and acceleration. 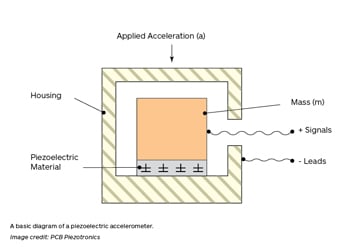 Within this basic framework, piezoelectric accelerometers may take many forms, each of which is suited to unique applications and environments. A few examples are listed in the table below. 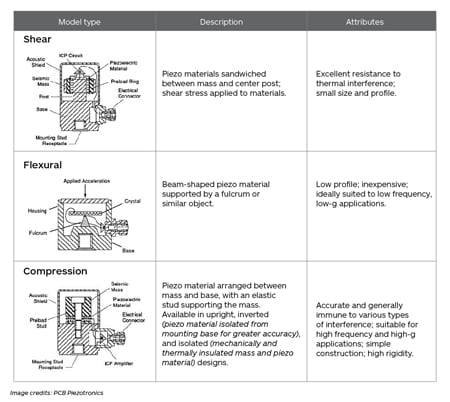 Piezoresistive accelerometers operate in a similar fashion to piezoelectric types, except that their output is measured as a change in resistance instead of electrical charge. These devices are typically manufactured as semiconductors, with separate resistive circuits for each axis to be measured. Each axis includes multiple piezoresistors, which decrease their resistive value when force is applied. Piezoresistive accelerometers are used in applications requiring measurement of high-g acceleration with a small sensor package.

The image below illustrates a design view of a typical three-axis piezoresistive accelerometer, showing (at right) that each circuit (or axis) is governed by four piezoresistors, labeled R1x, R2x, R1y, R1z, etc. 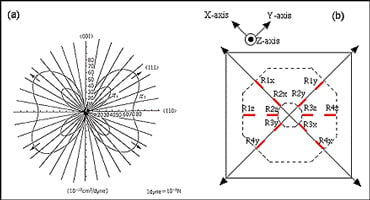 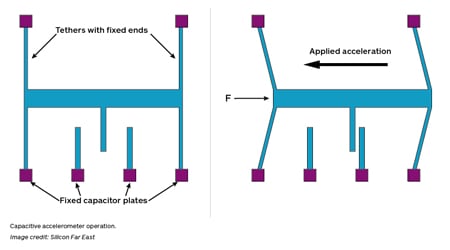 Capacitive accelerometers, sometimes known as capacitive mass-spring accelerometers, are semiconductor sensing devices. They consist of a silicon mass attached to four tethers, which collectively act as a spring system. When force is applied to one end of the mass, it moves and stretches the spring; the displacement of the mass therefore represents the measured acceleration. The displacement itself is measured using three capacitor plates: two fixed ones and a separate plate — located between the two fixed plates — which is attached to the mass. The inner capacitor moves with the mass, registering a change in capacitance relative to the fixed plates; this change is conditioned into a suitable output voltage to display or record acceleration data. Because the sensor's capacitance changes in relation to both fixed plates, these sensors can also output the direction of the acceleration.

Aside from the three types listed above, accelerometers may use any of the technologies listed below to measure acceleration.

Accelerometers may be manufactured, tested, and used based on guidelines laid out in various standards. Example standards include:

By posting a comment you confirm that you have read and accept our Posting Rules and Terms of Use.
Advertisement
RELATED ARTICLES
Researchers creates ultra-small accelerometer using graphene
Are We There Yet? Innovations That Led to Navigational Certainty
Sensors could speed up structural evaluations after a big quake
Examining motor torque for belt and pulley systems
Larson Davis HMV200 for Human Vibration Measurement
Advertisement