Are We There Yet? Innovations That Led to Navigational Certainty

We are now in the third stage of using technology for navigation. The first relied on using the sun and compass and eventually was aided by a clock for determining longitude. The second was based on inertial navigation using gyroscopes and accelerometers. In the third stage, we have the near-ubiquitous global positioning system (GPS).

While using sun and compass is an increasingly rare and vanishing skill, the widespread availability of GPS has not ended the need for inertial navigation. Whether it's because there is no GPS access underground, underwater or in outer space, or due to concerns about unintentional or malicious interference, there will always be a need to know where you are and where you going using a completely self-contained system. Such systems are called inertial measurement units (IMUs, also called an inertial navigation system, or INS), and need no external stimulus to operate.

Navigating a ship over open water is difficult, but the ship's speed generally is slow enough that there is enough time to navigate using the stars and sun, plus sextant and compass, if conditions are right. Even so, the inaccuracies of the compass called for a new approach, culminating in the development by Elmer Sperry of the gyrocompass. This device uses a single-axis gyroscope (gyro) to maintain a fixed orientation towards true north, regardless of the ship's position.

The development of aircraft put pressure on these limited navigation tools. Poor viewing conditions (fog, clouds), the high speed of aircraft, and the risks of becoming lost meant that new approaches were needed to guidance, navigation and control (GNC). 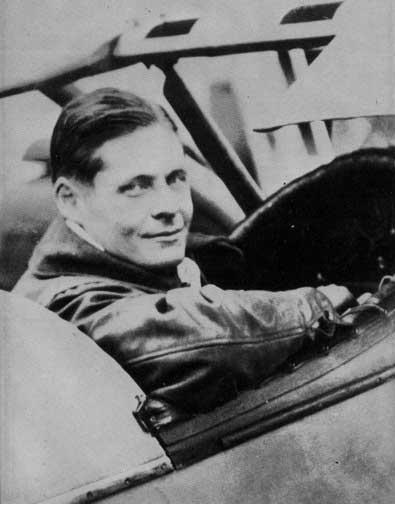 Lawrence Sperry was an early aviator who invented the autopilot, which allowed "hands-off" flying while maintaining aircraft stability. Image source: http://alchetron.com One problem was to develop a system that at least could maintain a constant directional heading while flying. Sperry's company was a leader in designing and producing gyro-based instruments. Elmer’s son, Lawrence, was one of the first pilots in the early days of aviation and an accomplished inventor. Although he died young in a plane crash, Lawrence greatly enhanced his father's gyrocompass design to function as an autopilot, modifying it to maintain the three flight axes (pitch, roll and yaw) unaided by hands-on pilot action.

The gyrocompass and autopilot showed what gyroscopes could do and Charles Stark Draper made it happen. Born in 1901, he attended Massachusetts Institute of Technology, where he earned his SB in electrochemical engineering in 1926, an SM in 1928, and a ScD in physics in 1938. He conducted research related to navigation and control systems, working first under sponsorship by the Sperry Gyroscope Co. 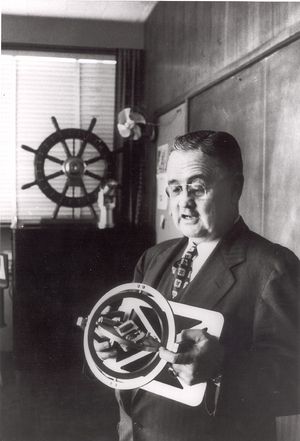 Charles Stark Draper transformed the basic gyro into an inertial navigation system during his tenure at MIT. Image source: http://ethw.org/Charles_Stark_Draper Draper had already done major and impressive work with gyros, using them as core to his innovations in developing the MK 14 Gunsight (1942) for ship-based antiaircraft guns. This gun-laying system successfully accommodated the roll and pitch of the ship while also tracking and "leading" the gun's aim against a fast-moving aircraft; Sperry Corp. built 100,000 of these using Draper's design in WWII.

Draper pushed the gyro-based IMU towards perfection during the 1950s with the development of the "floated" gyro. Even after the basic mechanical elements were as near-perfect as possible (such as use of pressurized-gas bearings rather than ball bearings), there would always be unavoidable errors and offsets due to the mass of the gyro rotor as it was pulled down by gravity. This was a small but measurable error source, and the solution was to make the rotor have neutral buoyancy and so appear weightless by immersing it in a high-density fluorocarbon fluid.

The resultant neutral buoyancy reduced the mass-gravity error, but even that was not enough for Draper. Since the density of any such fluid changes with temperature, the neutral buoyancy point of this floated gyro will not be constant. His solution was to heat the fluid to maintain it at a constant temperature (around 150 to 180⁰F) to eliminate the thermal variations, thus avoiding even this error source.

Inertial navigation relies on a stable platform with orientation which is fixed in space and maintains that orientation despite acceleration and rotation. Key to the inertial platform is the gyroscope, which actively resists any twists and turns, and is combined with a trio of accelerometers for the complete instrument.

Inertial systems based on gyroscopes are capable of astonishing accuracy. Due to many years of refinement in design, production, and analysis of shortcomings, their many subtle mechanical, thermal and electronic imperfections and sources of error have been identified and overcome; the addition of error-correcting calibration software has further improved their performance. A gyro-based IMU can guide an aircraft or missile to a goal within a few hundred meters over a distance of several thousand kilometers. 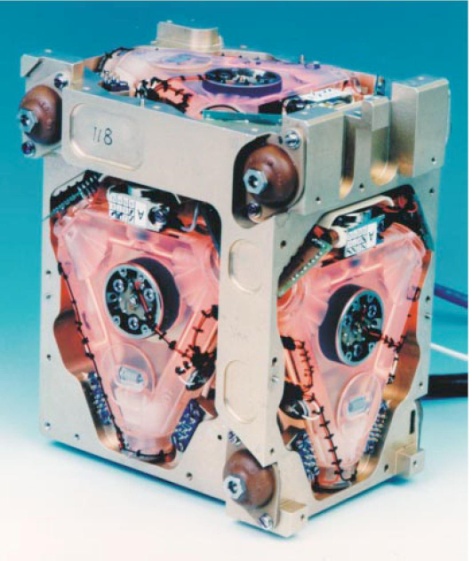 The fiber optic gyro uses relativistic principles and has no moving parts; unlike the gyro-based IMU, it is "strapped-down" to the vehicle and does not have a complex gimbal assembly. Image source: Ref. 6.Still, the mechanical complexity, size, maintenance issues, and power demands drove IMU designers to look for alternatives, especially in ways to eliminate the many moving parts: gyro rotor, accelerometers, electrical slip rings, sensors, torque motors, bearings, transducers, and most of all, the three-axis gimbaled assembly. In the 1960s and 1970s, a radically different approach became feasible, with the interferometric fiber-optic gyro (IFOG or FOG), and the similar ring laser gyro (RLG).

In this design, a laser beam is optically split and sent clockwise and counterclockwise into a long, coiled optical fiber. Any rotation motion around the coils axis translates into phase shifts between the two beams when they recombine, as a consequence of relativity principles and the Sagnac effect. Acceleration in any direction is measured using three orthogonal fiber loops.

The FOG's advantages can be dramatic: it has no moving parts and it is also installed differently. Instead of using a multi-axis gimbal to maintain a stable orientation in space as the vehicle moves, the FOG is "strapped-down" to the vehicle it is in, which simplifies the mechanical installation and initial calibration. As a consequence of this strap-down design, it does not report the vehicle’s acceleration or changes in orientation relative to the stable inertial platform. Instead, it tells the navigation system what changes it is "personally" sensing. This information is then converted to navigational information via numeric computation.

The strapdown FOG provides mechanical simplicity and lower cost, with smaller size and lower power need compared to a gyro-based system, but at a tradeoff in computation demands. That technical cost is not a burden now due to the processor advances of recent years. The first FOGs were installed on commercial jets in the mid-1980s; within a decade, they were standard on nearly all commercial aircraft.

Today, however, even the FOG faces competition from MEMS-based IMU components and complete systems. These integrated units cost anywhere from just a few dollars for a basic function such as a mid-range accelerometer or low-performance IMU (such as used on basic consumer drones and autonomous vehicles), to $100 for a high-end version. Although even a high-performance MEMS-based IMU is not as accurate and stable as a gyro-based or FOG unit, its specifications often are more than adequate for many applications, and they are getting better at a rapid rate.

As a result, the extremely small size, high reliability, low cost and low power needs of a MEMS-based IMU now make it the choice for all mass-market applications and many commercial ones. The gyro-based IMU is now used only in extreme application such as submarine, guided missile, or deep-space systems. Due to the dramatic advantages of MEMS approaches simultaneously across multiple system parameters, carefully tuned and calibrated MEMS-based designs are being incorporated even into those applications which demand the ultimate in performance.

From Toy to Ultra-Precision IMU

While the child's spinning top and the rotating wheel, gyroscope-based IMU have the same core element, developing a system with accuracy equivalent to a few hundred meters over thousands of kilometers or miles demands extreme attention to design, fabrication and analysis of error sources (and there are dozens of error sources, most of which are suitable for rigorous dissection).

The basic gyro-based IMU core mechanism is a three-axis gimbaled platform which, due to the gyros, is stabilized and maintains its absolute orientation in space despite any linear or angular motion of the vehicle to which it is attached. A trio of orthogonal accelerometers on this platform measures and reports acceleration along the x, y and z axes; since the platform orientation is fixed in space, this signal is used to determine the motion of the vehicle with respect to the platform.

In simplest terms, the acceleration signal is integrated to provide velocity information, which in turn is integrated to yield position (which was all done using analog circuits and vacuum tubes in early models). A complete gyro-based IMU ranges in size from a baseball to a basketball.

In principle, a mass on a spring can provide the accelerometer function, but in practice it has serious performance limitations. Image source: Ref. 5. There are many ways available to implement the accelerometers, which are as critical to performance as are the inertial gyros. The simplest way is to use a spring-loaded mass, but dynamic range and accuracy of this approach are modest. Another approach uses the piezoelectric principle, where a crystal is squeezed and this stressed to a greater or lesser extent depending on acceleration; here, cost and mechanical complexity are low but performance is also modest. 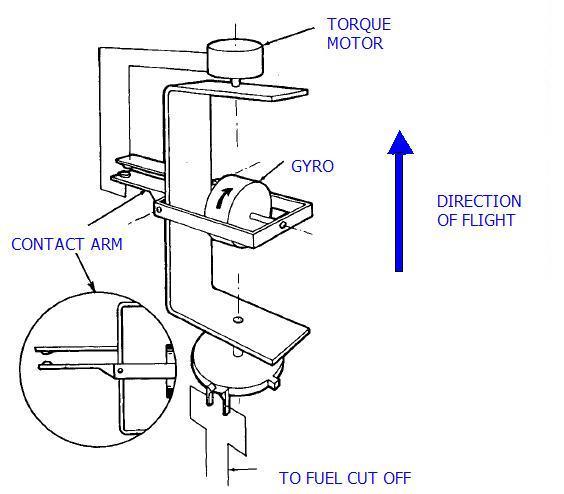 The gyro-based PIGA is the highest-performance accelerometer; this basic version with engine shut-off contacts was developed by the Germans in WWII to guide V2 rockets and then cut off fuel to the engine so the rocket would fall to Earth on the target. Image source: Ref. 2. For the best performance, a complex configuration called the PIGA (pendulous integrating gyro accelerometer) is used. In this design, linear acceleration causes an internal gyro (unrelated to the platform gyro) to rotate in proportion to the acceleration along its primary axis (an early version of the PIGA was used by the German V-2 rockets in WWII). A high-end PIGA has an extraordinary dynamic range along with accurate performance over nine orders of magnitude, from 10-7 g to 50 g.

This combination of a fixed-in-space, gyro-stabilized inertial platform with PIGAs to read out acceleration forms the core of a complete high-end IMU; of course, there is much more to the design of a full IMU. The remaining challenges include identifying all sources of error due to mechanical or electrical imperfection or drift, and devising ways to eliminate, cancel, overcome, or accommodate them.

8. "The Guidance of Space Vehicles," NASA.

By posting a comment you confirm that you have read and accept our Posting Rules and Terms of Use.
Advertisement
RELATED ARTICLES
MEMS-Based IMU/AHRS Integrated into Neya’s Custom UxAB Module
How to Measure Dynamic Tilt With an IMU
Watch: All about Aceinna's new Open Source IMU package
How Do Unmanned Underwater Vehicles Navigate Autonomously?
Inertial Measurement Technology Could Aid Grade Control
Advertisement