In more than 50 years of space activity, more than 4,900 launches have carried around 6,600 satellites into space. About 3,600 of those satellites remain in space and around 1,000 remain operational today.

The result of all of this activity is an increasing mass of space debris orbiting Earth. These objects pose a growing threat to infrastructure such as the International Space Station (ISS) as well as communication and defense satellites. Scientific models estimate that there are about 29,000 pieces of debris larger than 10 cm, 670,000 fragments larger than 1 cm, and of more than 170 million bits larger than 1 mm. Travelling at speeds up to 17,500 mph, even small pieces have the potential energy to damage satellites or spacecraft.

While debris shields can be effective against impacts with particles smaller than 1 cm, objects between 1 cm and 10 cm are usually too small to be tracked and too large to shield against. Even tiny specks of paint present a threat. Space shuttle windows on occasion were damaged by impacts with material that proved to be paint flecks. 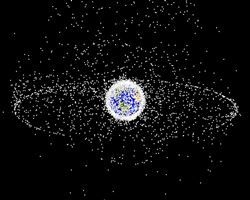 Space debris seen from outside geosynchronous orbit. The two main debris fields are the ring of objects in GEO and the cloud of objects in low Earth orbit. Image source: WikipediaMajor collisions with space debris have been relatively rare; with more than 250 in-orbit fragmentation events, fewer than 10 were accidental or intentional collisions. In 1996, a French satellite was damaged by debris from a French rocket that had exploded a decade earlier. In 2007, China carried out a test of anti-satellite technology, using a missile to destroy an old weather satellite. The resulting explosion ejected more than 3,000 new pieces of trackable debris. And in 2009, a defunct Russian satellite crashed into a functioning U.S. Iridium telecommunications satellite, adding more than 2,000 trackable pieces of debris.

Each collision spreads more fragments across the orbital paths around Earth, increasing the probability of future accidents. Scientists have warned of a cascade effect of self-sustaining collisions that could occur over the next few decades if remediation measures are not taken.

Collisions are not the only source of space debris. The last stages of rockets used to launch satellites can remain in orbit for years. Material on this equipment deteriorates in the harsh environment of space; ultraviolet radiation from the sun breaks down paint and other surface materials, which can flake off and add to the debris. In-orbit explosions of old satellites and rocket bodies can be caused by failing batteries or residual fuel in fuel lines and tanks.

As many as 420,000 observations per day are used to perform spot checks on targets. Continual tracking is impractical, however, due to the number of sensors and their geographic distribution, capability and availability. More than 39,000 man-made objects have been catalogued since the launch of Sputnik in 1957. The SSN currently tracks more than 16,000 objects. The catalog covers objects larger than 5 - 10 cm in low Earth orbit and 30 cm to 1 m in geostationary orbit. This object population consists of about 5% active spacecraft, 8% expended rocket stages and 87% debris (including defunct satellites).

Sensors used in the SSN include radar and optical instruments. Phased-array radars are able to track multiple objects simultaneously by transmitting energy into a large area of space and receiving reflected signals back from objects within the scanned area. Conventional radar relies on a narrow-beam tracking antenna to follow satellites and compute their location. Telescopes are particularly useful for tracking some 4,000 objects that are in space orbits more than 36,000 km (22370 miles) from Earth, such as communications satellites in geostationary orbit. The SSN also uses space-based sensors that avoid interferences associated with ground-based solutions such as atmospheric weather.

JFCC Space also performs conjunction analysis for all active spacecraft. This analysis involves projecting the orbital paths of objects to determine if any intersections will occur with high-value objects such as the International Space Station. An imaginary box 1.5 x 50 x 50 km in size is drawn around the target. If any debris is predicted to pass within this area, an alert is issued so that collision avoidance maneuvers can be executed.

U.S. National Aeronautics and Space Administration (NASA) guidelines specify that a maneuver should be conducted if the probability of collision is greater than 1 in 100,000, and if the maneuver will not significantly impede mission objectives. If the odds are greater than 1 in 10,000, the maneuver will be conducted as long as it will not result in additional risk to the crew. The ISS performed five such debris avoidance maneuvers in 2014 .

The number of processes acting to remove objects from Earth orbit is currently inadequate to address the problem of increasing space debris. The natural process of atmospheric drag causes orbits to decay, especially for debris in low Earth orbits (LEO) at altitudes of 200 to 2,000 km. Satellites beyond LEO can remain in orbit for many decades, however, unless they are intentionally deorbited. Atmospheric drag becomes less effective above 800 km (497 miles), and debris concentration is highest at altitudes of 800 km to 1,000 km (621 miles) and around 1,400 km (870 miles).

Cleaning up the debris will require an international effort. The Inter-Agency Space Debris Coordination Committee (IADC) provides an international forum for coordinating space debris issues. Only some of the participating nations have effective guidelines for limiting the orbital lifetimes of defunct spacecraft. International regulations requiring satellites to have a deorbiting capability at the end of a mission’s life might help curb the rise of space debris.

One way to address the problem is to physically remove debris from orbit with a specialized spacecraft. The European Space Agency’s (ESA) Clean Space initiative is developing the e.DeOrbit mission to target debris in highly trafficked polar orbits between 800 and 1,000 km in altitude. Capture techniques being studied include harpoons, robotic arms and nets.

For objects remaining in orbit for a substantial length of time, rendering passive power and fuel systems that could deteriorate and cause fragmentation events is important. This includes discharging batteries and venting residual propellant from tanks and fuel lines. Systems to promote disrupting the orbit of inactive satellites include tethers that use Earth’s magnetic field to increase orbital drag and terminator sails to increase atmospheric drag in low-orbit applications.

A technology developed by the Japanese research institute RIKEN uses a space-based detector and laser system to remove small debris from orbit. The detector is a super-wide field of view telescope and the laser is coopted from one developed to power particle accelerators. The system would be capable of deorbiting debris around the size of 1 cm by causing surface ablation and reducing the orbital velocity of debris pieces leading to re-entry into Earth’s atmosphere. A prototype is planned for deployment on the ISS, and a full-scale version would have an effective range of 100 km (62 miles).