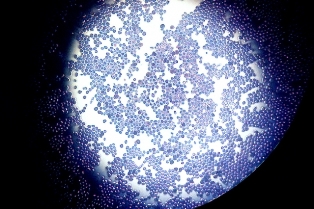 Manufacturers worldwide use yeast to convert sugars from corn or sugar cane into ethanol, a biofuel now blended in cars and trucks. Source: wikipedia.comThe team from Massachusetts Institute of Technology (MIT) says they spike the mixture they are growing with two common chemicals. Adding potassium and an acidity-reducing compound enable the yeast to tolerate higher concentrations of the ethanol they are making without dying.

With those “supplements”, laboratory yeast made more ethanol than the industrial strains genetically evolved for ethanol tolerance, and they also allowed lab yeast to tolerate higher doses of high-energy alcohols, such as butanol.

"The biggest limitation on cost-effective biofuels production is the toxic effect of alcohols such as ethanol on yeast," says Gregory Stephanopoulos, the Willard Henry Dow professor of Chemical Engineering at MIT. "Ethanol is a byproduct of their natural metabolic process, as carbon dioxide is a byproduct of ours. In both cases, high doses of those byproducts are lethal."

Manufacturers worldwide use yeast to convert sugars from corn or sugar cane into ethanol, a biofuel now blended with gasoline for use in cars and trucks.

However, at certain concentrations, the ethanol kills the yeast that makes it, and a given batch of yeast can only produce so much ethanol.

The team also discovered that the elevated potassium plus reduced acidity results in increased cell viability, and thereby ethanol productivity.

“The ability to endure toxicity is a principle determinant of ethanol output—and it is the primary trait strengthened by our supplements," says Gerald Fink, MIT professor of biology and a member of the Whitehead Institute for Biomedical Research.

Fellow researcher Felix Lam, a postdoc in chemical engineering, says the largest boost—by far—comes from individual cells being able to withstand higher levels of ethanol. "The per-cell production rate hardly changes, but the cells stay alive much longer; and the longer they live, the more ethanol they make," Lam says.

By posting a comment you confirm that you have read and accept our Posting Rules and Terms of Use.
Advertisement
RELATED ARTICLES
Production of ethanol and its effluent treatment
Ethanol Production Process Improves Yields, Cuts Costs
Sorghum Cultivars Can Yield Thousands of Gallons of Ethanol/Acre
Chemical Engineers Take Step Toward Bio-diesel
Producing More, Cleaner Bioethanol with Nitrogen Gas
Advertisement