Engineers from Harvard University have developed one of the first 3D-printed robot, made out of rigid and soft components.

The robot is made up of two main parts: a soft plunger-like body with three pneumatic legs, and a rigid core of the key components, including a battery and an air compressor. 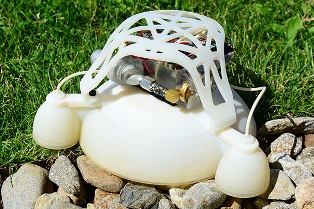 The body has nine different material layers and is produced in one continuous 3D print job. It is made out of a highly flexible and rubber-like layer to fully rigid and thermoplastic-like protective shell.

The different layers reduce stress where the rigid electronic components join the body to increase the robot's resiliency. The robot also has no sliding parts or traditional joints, improving reliability and making it more suitable for use in harsh environments.

"Soft robotics is a relativity nascent subfield and 3D printing is adding to the repertoire of things we can do in a really practical way," says Robert Wood, professor of engineering and applied sciences at the Harvard John A. Paulson School of Engineering and Applied Sciences.

To move, the robot inflates its pneumatic legs to lean its body in the direction it wants to go, and then the butane and oxygen are ignited, springing the robot into the air. The robot can reach up to six times its body height in vertical leaps and half its body width in lateral jumps.

“This robot is a demonstration of a method to integrate the rigid components with the body of the soft robot through a gradient of material properties, eliminating an abrupt hard-to-soft transition that is often a failure point," says Wood.

The researchers say the hopping motion could be an effective way to move in a disaster area, because it can quickly and easily maneuver around obstacles. The soft body would also allow it to survive large falls and other unexpected situations.

"The wonderful thing about soft robots is that they lend themselves nicely to abuse,” says Nicholas Bartlett, a researcher on the project. “The robot's stiffness gradient allows it to withstand the impact of dozens of landings and to survive the combustion event required for jumping. Consequently, the robot not only shows improved overall robustness but can locomote much more quickly than traditional soft robots."