Researchers from Duke University created a soft, dragonfly-shaped robot named DraBot that could be used to gather environmental data. The robot skims across the water and reacts to environmental conditions like pH, temperature and oil presence.

Soft robots are a growing trend because of their versatility. The soft parts can handle delicate objects that rigid parts struggle to control. Soft bodies also help robots float or squeeze into tight spaces where rigid frames would get stuck. 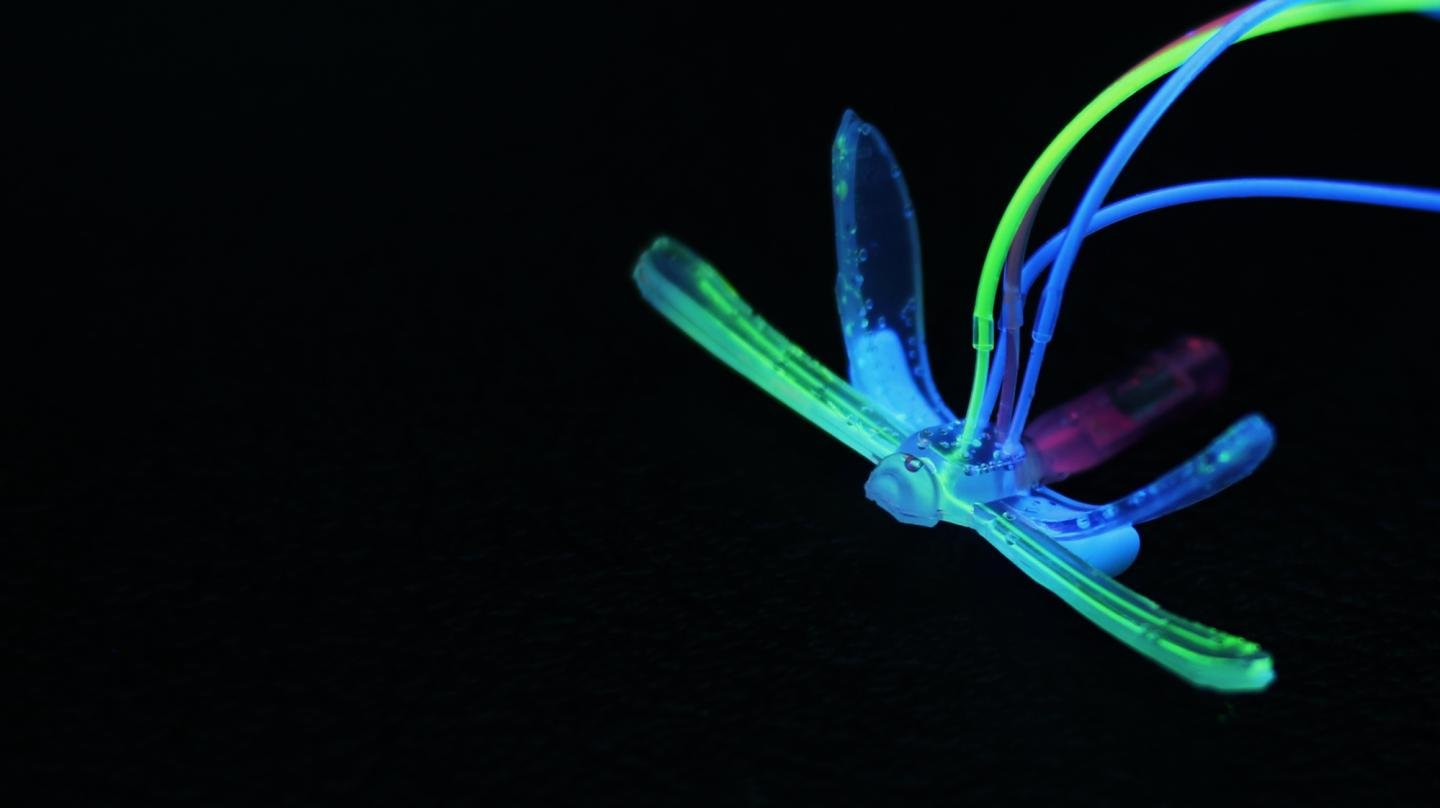 With the ability to sense changes in pH, temperature and oil, this completely soft robot dubbed "DraBot" could be the prototype for future environmental sentinels. Source: Vardhman Kumar

In 2012, a team of researchers created a self-healing hydrogel that reacts to changes in pH within seconds. The change in acidity causes the hydrogen to form new bonds that are reversible when the pH returns to normal levels. Researchers wanted to find a way to use this hydrogel on a soft robot that could travel across water and indicate pH changes.

They started by designing a soft robot based on a fly. Ultimately, they settled on a dragonfly shape engineered with a network of interior microchannels that allow the robot to be controlled with air pressure. The body is 2.5 inches long with a 1.4-inch wingspan. Soft lithography was used to create interior channels connected to the flexible silicone tubing.

The robot operates by controlling the air pressure coming into its wings. Microchannels carry air into the front wings, and it exits through a series of holes pointed directly into the back of the wings. If both back wings are down, airflow is blocked and DraBot does not move. If both wings are up, DraBot moves forward.

Balloon actuators were placed under each of the back wings, close to DraBot’s body, as an added element of control. When inflated, the balloons cause the wings to curl upward. By changing the position of the wings, DraBot is told where to go.

The self-healing hydrogel allows DraBot to move in reaction to the environment. One set of wings is painted with hydrogel and which makes DraBot responsive to changes in the surrounding water’s pH. If the water becomes acidic, one front wing fuses with the back wing. This causes an imbalance and the robot spins in a circle. When the pH returns to normal, the wings un-fuse and separate, causing DraBot to become fully responsive to commands again.

The team placed sponges under the wings and doped the wings with temperature-responsive materials. When the robot skims over the water with oil floating on the surface, the sponges soak it up and change colors to the corresponding color of the oil. When the water becomes overly warm, the wings change from red to yellow.

These measurements could play an important part in an environmental robotic sensor in the future. Responsiveness to pH can detect freshwater acidification, which is a serious environmental problem affecting several geologically sensitive regions. It could also be used for oil spill detection, signs of red tide and bleaching of coral reefs, all of which lead to a decline in the population of aquatic life.

The team says there are improvements that could be made to DraBot. Wireless cameras or solid-state sensors could be added for further detection abilities. They could also create an onboard propellant that would help similar bots break free of the tubing.

A paper on DraBot was published in Advanced Intelligent Systems.

By posting a comment you confirm that you have read and accept our Posting Rules and Terms of Use.
Advertisement
RELATED ARTICLES
These swimming bots are four times faster than similar swimming bots
Flippy Wings the chicken wing flipping robot developed by Miso Robotics
A flapping-wing drone inspired by birds
Sticky Hydrogel May Have Health, Marine Applications
Scientists develop 'walking' plastic
Advertisement