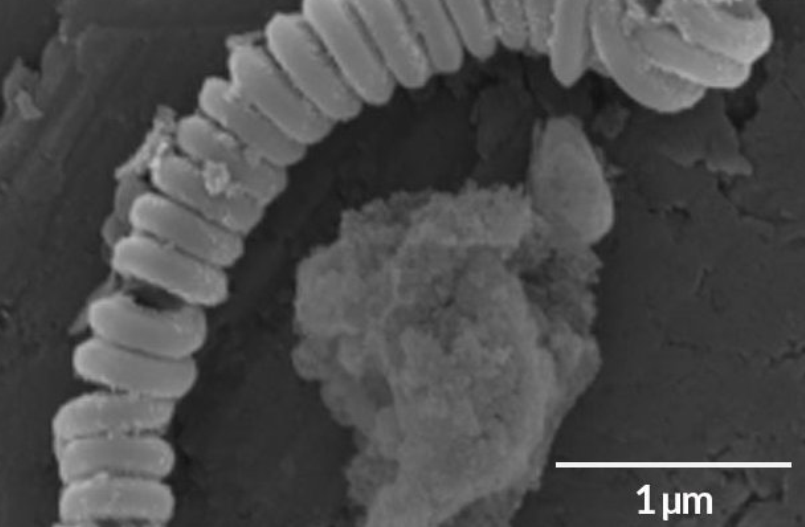 A nano-coil barely bigger than one billionth of a meter in width. Source: J. Kang et al.A team of Australian scientists has developed a nanotechnological means to break down ocean microplastics.

The team, from the University of Adelaide, developed microscopic nanotubes, or nanocoils, which resemble a spring and are composed of carbon and coated with nitrogen, which facilitates the creation of reactive oxygen species. Reactive oxygen species trigger chain reactions that disassemble the long-chain polymers of microplastics, converting the plastic pieces into innocuous salt compounds, water and carbon dioxide.

To demonstrate, the team of scientists submerged the nanocoils in water samples containing microplastic pollutants. Under observation, the team discovered a 30% to 50% reduction of microplastics after eight hours.

The nanotubes suffer no damage from the reaction, and adding manganese to the materials provides magnetism to assist in recollecting the nanotubes for reuse. Before the technology is suitable for use in the ocean or at wastewater treatment facilities, author Xiaoguang Duan and his team believe that additional testing of the technology is necessary.

The research is detailed in the journal Matter.

Plastic and microplastic pollution are overwhelming nearly every segment of the planet. A variety of solutions to the plastic waste crisis are underway by a number of researchers, innovators and startups. Washington State University scientists have discovered a method for turning plastic waste into jet fuel, while researchers at the University of Chester in the U.K. have devised a technique for converting unrecyclable plastic into electricity and green fuel, with the hope of one day fueling cars and powering homes and entire power grids.

By posting a comment you confirm that you have read and accept our Posting Rules and Terms of Use.
Advertisement
RELATED ARTICLES
Tiny Microplastics in the Ocean Also a Threat to Whales, Sharks: Study
Watch this robotic fish "eat" plastic
Plastic Discovered in Mussels from the Arctic to China
Study: Record Concentration of Microplastics Found in Arctic
Microplastic Levels High in Northwest Atlantic Fish
Advertisement