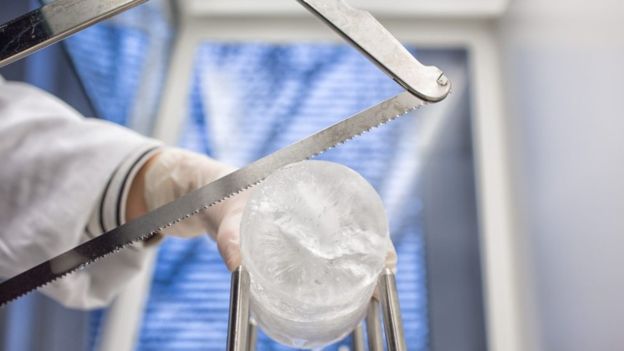 The ice cores were analysed for traces of plastic. Source: Alfred Wegener Institute/T.VankannAccording to a new report, record levels of microplastics have been found in floating sea ice in the Arctic.

Taking ice core samples from locations throughout the Arctic Ocean during the spring of 2014 and the summer of 2015, scientists found traces of 17 different types of plastic in concentrations two to three times greater than what was found in previous studies.

The team of scientists from Germany that set out to measure the microplastics believe that as sea ice melts with climate change, the plastics held in the frozen water will eventually be released back into the water.

"As climate change will accelerate sea ice melting, more microplastics will be released from the sea ice and will enter the marine environment," said Dr Pennie Lindeque, lead plastics scientist at Plymouth Marine Laboratory, who was not part of the research team.

While little is known how this will impact wildlife, the under 5 millimeters-long plastics can be consumed by filter-feeding animals and, consequently, passed up the food chain.

"No one can say for certain how harmful these tiny plastic particles are for marine life, or ultimately also for human beings," said Ilka Peeken of the Alfred Wegener Institute, Helmholtz Centre for Polar and Marine Research in Bremerhaven, Germany, who led the study.

In the lab, the research team looked at the “fingerprint” of the plastics and estimated that much of it was from the Pacific Ocean Garbage Patch as well as from local shipping and fishing pollution.

"Using this approach, we also discovered plastic particles that were only 11 micrometers across," said co-researcher Gunnar Gerdts, also from the Alfred Wegener Institute.

"That's roughly one-sixth the diameter of a human hair, and also explains why we found concentrations of over 12,000 particles per liter of sea ice — which is two to three times higher than what we'd found in past measurements."

Calling it a “benchmark study,” Dr Jeremy Wilkinson, a sea ice physicist at the British Antarctic Survey, said: "Microplastic particles were found throughout all cores sampled. It suggests that microplastics are now ubiquitous within the surface waters of the world's ocean. Nowhere is immune."

As such, researchers believe that understanding how the plastic waste ends up in the Arctic and its environmental impact are critical to finding a solution to the problem.

By posting a comment you confirm that you have read and accept our Posting Rules and Terms of Use.
Advertisement
RELATED ARTICLES
Snow brings microplastics to Earth's arctic
Evidence of Deep-Sea Animals Ingesting Microplastics
Greenpeace Study Reveals Microplastics Found in Majority of Table Salts
Researchers Discover that Flash Floods Carry Significiant Amount of Microplastics from Rivers to the Sea
Plastic Discovered in Mussels from the Arctic to China
Advertisement