Bearing terms and calculations every design engineer should know 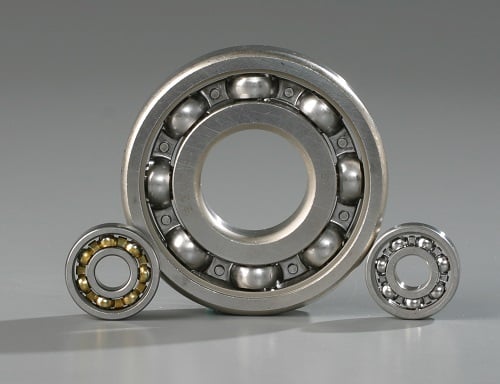 Source: AST BearingsBearings are found in virtually every rotating assembly in equipment and power transmission applications. They produce smooth rotary motion and reduce friction and wear. When sized and used properly, most bearings will operate for many years without requiring replacement. The terms and formulas in this article will help the design engineer with bearing selection.

Every mechanical design engineer incorporating ball or roller bearings in their assembly should be familiar with calculations for bearing life and bearing load. Knowledge of these basic formulas will help ensure a robust design optimized for long life.

The American Bearing Manufacturers Association (ABMA) and International Organization for Standardization (ISO) have developed terms and definitions concerning bearing life and load. Bearing manufacturers publish static and dynamic load ratings for each bearing type according to:

Bearing life is a function of bearing load, and understanding the terminology and definitions for life and load is important before performing any calculations.

Bearing life (L) is defined as the number of hours the bearing can run at a given constant speed before it displays the first signs of fatigue in the material of either bearing ring or any of the rolling elements.

Bearing load is expressed with different terms, each with a unique definition. Static loads refer to loads on a non-rotating bearing.

Basic load rating (CB) is a calculated constant load for radial and angular contact bearings. It is the load that a group of apparently identical bearings can endure for one million revolutions of the inner ring while the outer ring is held stationary. The units for basic load rating are pounds (lb) or Newtons (N).

Static equivalent load (Po) is a calculated static, radial load. It is defined as the load that would cause the same total permanent deformation at the most heavily stressed rolling element and raceway contact as that which occurs under the actual loading condition. The units for static equivalent load rating are pounds (lb) or Newtons (N).

Bearing life (L10) can be calculated with the following formula. Variables required are basic dynamic load rating (C) and the dynamic equivalent load of the bearing (P).

To convert from revolutions to hours divide by the speed (rpm).

The dynamic equivalent load (P) is a function of the radial and axial loads and a radial and thrust factor. Even bearings whose primary loading is radial will most likely experience some axial loading as well. These loads can be combined to determine the dynamic equivalent load. For most bearing types with filling notches for balls, use the higher of the two values given by the following formulas. While these formulas offer a good starting point, other factors can also influence effective bearing life and load ratings.

Subscribe to Engineering360 Newsletters for industrial and engineering news and information:

By posting a comment you confirm that you have read and accept our Posting Rules and Terms of Use.
Advertisement
RELATED ARTICLES
Fundamentals of ball bearings
Ball Bearings: Specifications and Selection Criteria for Engineers
Bearing tolerances explained
Specifying Hydrostatic and Hydrodynamic Bearings
Bearing preload: What is it and why is it important?
Advertisement