How important is innovation to welding?

What comes to mind when you think of innovation? Steve Jobs or Elon Musk? Thomas Edison’s groundbreaking discoveries? A eureka moment that wakes an engineer in the middle of the night?

In reality, innovation is a little less exciting and much more gradual: it is simply the act of applying better solutions to existing problems or even problems yet to be uncovered. While eureka moments seem rare in the world of welding, the industry has been driven by steady, incremental improvements.

The history of welding began during the Bronze Age, when artisans joined different bronzes by casting. During the Middle Ages, smiths developed forge welding, in which two metals were pounded together at high temperatures. 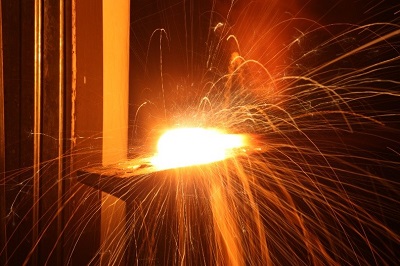 Figure 1: Forge welding was first used for metal joining during the Middle Ages. Source: Kevin Wood / CC BY-SA 3.0After several small innovations throughout the 19th century, Nikolai Benardos and Stanislaw Olsczewski invented the groundbreaking electric arc welding in 1881. Arc welding continued to improve well into the 20th century, and was complemented by the advent of resistance welding, acetylene welding and stud welding. Demand for ships and other metal structures during World War I accelerated the development of metal-joining technology, introducing innovations like continuously fed wire electrodes and shielding gases.

Moving from innovative to off-the-shelf

It often takes decades following the invention of a new technique or improvement to see it become widespread. Research and advisory firm Gartner developed its hype cycle in an attempt to describe this journey, positing that all new technologies are subject to inflated expectations at the outset, followed by a period of disillusionment and then a leveling-off as they become ubiquitous.

Laser-hybrid welding is a good example of a joining technique that is decades-old but only just beginning to flourish in a wider context. The “hybrid” refers to the fact that the joining process combines laser beam welding (LBW) with some type of arc welding — either gas tungsten arc welding (GTAW), plasma arc welding (PAW) or gas metal are welding (GMAW) —. This process, which was first developed in the 1970s, allowed for increased joining speed, deeper weld penetration, reduced filler metal and overall improved weld quality. Laser-hybrid welding has nonetheless been slow to catch on due to its specialized equipment and high investment costs, as well as its high number of control parameters and variables that make it better suited for research laboratories than shop floors.

Nanotechnology on the cutting edge

Adding nanoparticles to filler alloys has allowed researchers to weld difficult or impossible metals such as AA7075 aluminum and A206 aluminum-copper. While developments like these are only occurring in labs, other nanotechnology-enabled technologies are robust and commercialized.

NanoFoil, manufactured by Indium Corporation, is one such innovation. The product is a reactive multi-layer foil formed by vapor-depositing thousands of nanoscale aluminum and nickel layers; it provides instantaneous, precisely controlled heat upon ignition. When sandwiched between layers of solder or brazing alloy and substrates to be joined, the NanoFoil provides localized heat that creates a perfect, repeatable joint. The foil has a long history of research in academic and industrial settings and is only one of a number of current nanotechnology-driven innovations.

While welding innovations (and indeed, all innovations) rarely include eureka moments that instantly shift the industry, new developments in techniques and materials indicate that forward-thinking is alive and well.

By posting a comment you confirm that you have read and accept our Posting Rules and Terms of Use.
Advertisement
RELATED ARTICLES
Welding Digest’s reader picks for 2019
What’s new with beam welding? Part 2
Green welding: good for the environment and the bottom line
Tech tips for welding magnesium — Part 2: Shielding and filler requirements
What’s so special about beam welding? Part 3: Beam welding advantages and applications
Advertisement