Stanford University scientists have developed what they says is a "smart" lithium-ion battery that gives warning before it overheats and ignites.

The technology is designed for conventional lithium-ion batteries used in cellphones, laptops and other electronic devices, as well as a growing number of cars and airplanes.

"Our goal is to create an early-warning system that saves lives and property," says Yi Cui, an associate professor of materials science and engineering. "The system can detect problems that occur during the normal operation of a battery, but it does not apply to batteries damaged in a collision or other accident." (View a video animation of the technology.) 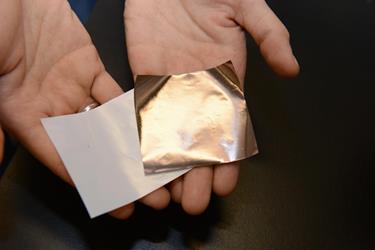 Copper sensor sits atop a typical battery separator. Credit: Mark Shwartz, Precourt Institute for Energy, Stanford UniversityA typical lithium-ion battery consists of two tightly packed electrodes – a carbon anode and a lithium metal-oxide cathode – with an ultrathin polymer separator in between. The separator keeps the electrodes apart. If damaged, the battery could short-circuit and ignite the flammable electrolyte solution that shuttles lithium ions back and forth.

"The separator is made of the same material used in plastic bottles," says graduate student Denys Zhuo, co-lead author of the study. "It's porous so that lithium ions can flow between the electrodes as the battery charges and discharges."

Manufacturing defects, such as particles of metal and dust, can pierce the separator and trigger shorting. Shorting can also occur if the battery is charged too fast or when the temperature is too low – a phenomenon known as overcharge.

"Overcharging causes lithium ions to get stuck on the anode and pile up, forming chains of lithium metal called dendrites," Cui says. "The dendrites can penetrate the porous separator and eventually make contact with the cathode, causing the battery to short."

"In the last couple of years we've been thinking about building a smart separator that can detect shorting before the dendrites reach the cathode," says Cui.

To address the problem, the Stanford team applied a nanolayer of copper onto one side of a polymer separator, creating a third electrode halfway between the anode and the cathode.

Cui and his colleagues describe the new technology in a study published in the Oct. 13 issue of the journal Nature Communications.

By posting a comment you confirm that you have read and accept our Posting Rules and Terms of Use.
Advertisement
RELATED ARTICLES
Research Seeks to Improve Lifespan, Safety of Lithium Batteries
Sandwich battery offers powerful treat for EVs
Anode design benefits battery performance
Drive range anxiety away with this fast-charging battery
Dendrites Detained by Li Metal Battery-Nanotube Duo
Advertisement