Zero-emission ferry to debut this fall in San Francisco 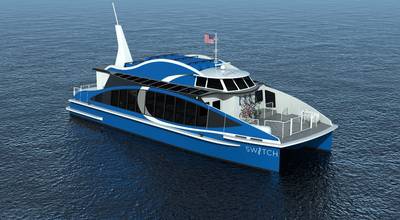 The 84-passenger ferry, dubbed the “Water Go Round,” which is currently under construction at the Bay Ship & Yacht shipyard in Alameda, California, will begin transporting commuters across San Francisco Bay once construction is completed in September and the ferry undergoes a three-month-long proof of concept trial in the fall. With private funding from SW/TCH and a $3 million grant from the California Air Resources Board (CARB), the ferry is expected to offer commuters a clean transportation solution to traffic in the Bay area.

The so-called e-ferry will rely on all-electric propulsion powered either by batteries charged with shore power or hydrogen fuel cells, bypassing the need to burn carbon-intensive fossil fuels. Because such a zero-emission scheme is only possible with considerable investment in new fueling infrastructure, SW/TCH Maritime is also partnering with Clean Marine Energy (CME) to build onshore electric charging and hydrogen fueling infrastructure.

“San Francisco is one of many growing port cities in the U.S. that is struggling to accommodate intensifying strain on legacy commuting systems, but has untapped potential to better use its waterways,” said Pace Ralli, co-founder of SW/TCH.

The Water Go Round is expected to be the flagship of a fleet of zero-emission ferries operating all over the U.S. It is just one segment of SW/TCH Maritime’s goal of expediting the adoption of zero-emissions modes of transportation.

By posting a comment you confirm that you have read and accept our Posting Rules and Terms of Use.
Re: Zero-emission ferry to debut this fall in San Francisco
#1

I was expecting to see something entirely different considering its San Francisco and all...

Re: Zero-emission ferry to debut this fall in San Francisco
#2

So the batteries will be charged w/ shore power electricity generated from a fossil fuel fired steam plant w/ a maximum efficiency of ~65%? Not an answer to the greenhouse gas emissions, actually makes the matter worse. AQMD in SoCal knew this 30 years ago, that's why they discarded the electric car concept. Only a nuclear power plant can ecologically generate electric power.

Re: Zero-emission ferry to debut this fall in San Francisco
#3
In reply to #2
PAPADOC