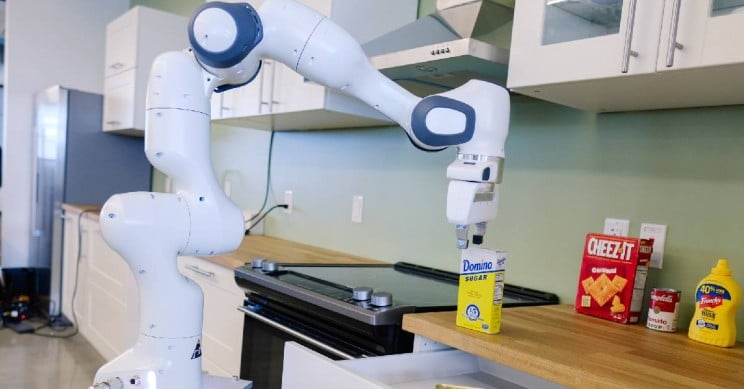 Source: NVIDIATech company NVIDIA is preparing to open a robotics research lab in Seattle to teach robots how to work safely alongside humans. Roughly 50 research scientists, student interns and faculty visitors will observe robots in a realistic kitchen setting where they will perform tasks such as helping cook meals or retrieving items from kitchen cabinets.

Robots will operate in this setting with help from dense articulated real-time tracking (DART), a technique that uses depth cameras to monitor a robot’s environment; Pose-CNN: 6D object pose estimation, a technique for identifying the 6D pose and location of objects; Riemannian Motion Policies (RMP) for reactive manipulator control, a mathematical structure that combines a catalog of simple actions into complex behaviors; and physics-based photorealistic simulation, a realistic simulation environment that models the visual characteristics of items as well as the forces and contacts between those items and manipulators.

“In the past, robotics research has focused on small, independent projects rather than fully integrated systems. We’re bringing together a collaborative, interdisciplinary team of experts in robot control and perception, computer vision, human-robot interaction, and deep learning,” said new lab lead Dieter Fox, senior director of robotics research at NVIDIA and professor in the UW Paul G. Allen School of Computer Science and Engineering.

"By pulling together recent advances in perception, control, learning, and simulation, we can help the research community solve some of the world’s greatest challenges,” said Fox.

For more on the lab, watch the accompanying video that appears courtesy of NVIDIA.

By posting a comment you confirm that you have read and accept our Posting Rules and Terms of Use.
Advertisement
RELATED ARTICLES
Cooking with artificial intelligence
This robot may soon assist nurses in healthcare settings
Video: Starfish robot designed for underwater applications
Robotic kitchen will now prep meals in the home
Experts want answers to questions concerning robots in the workplace
Advertisement