The U.S. Department of Energy (DOE) Fusion Energy Sciences Advisory Committee (FESAC) has adopted and endorsed a new report outlining a strategic plan for fusion energy and plasma science research over the next decade. Two years in the making, the document charts a path in the quest to develop fusion as a limitless and practical source of energy while also advancing areas of fundamental plasma science.

“From building powerful superconducting magnets for controlled fusion reactions and pioneering novel concepts for inertial fusion, to advanced lasers enabling high-energy-density science and miniature accelerators, to the modeling and simulation of powerful laser beams and plasmas, we have a lot to offer 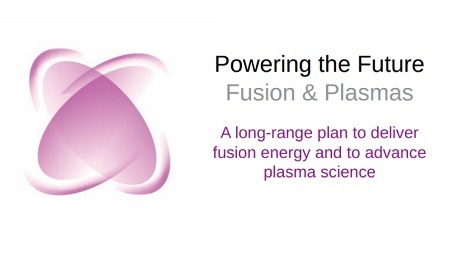 Developments in fusion science and technology should be geared toward advancing the capabilities required to confine and sustain a burning plasma, fabricating the materials required to withstand the extreme environment of a fusion reactor and engineering the technologies needed to breed fusion fuel and to generate electricity in a fusion pilot plant by the 2040s.

In plasma science and technology, future focus should be on developing a deeper understanding of the plasma universe, exploring new regimes and exotic states of matter and unlocking the potential of plasmas to transform society.

Among the highest-priority facilities to support these goals are a Fusion Prototypic Neutron Source that would provide irradiation capabilities to test candidate fusion reactor materials and a new domestic tokamak called EXCITE that would study approaches for handling the extreme heat fluxes expected in a compact fusion plant. Additional facility priorities include completing the Material Plasma Exposure eXperiment (MPEX) at U.S. Oak Ridge National Lab as well as building a facility for testing components of the blankets that will envelop reactor cores and generate tritium fuel to sustain fusion reactions.

The U.S. will continue contributing to the ITER tokamak facility under construction in France over the 10 year planning window. The plan also supports pursuing non-tokamak-based approaches to fusion, such as stellarators, which like tokamaks use magnetic fields to confine plasmas but have more exotic geometries.

Re: Long-range plan for fostering US fusion energy
#1

Re: Long-range plan for fostering US fusion energy
#2
In reply to #1
Brave Sir Robin