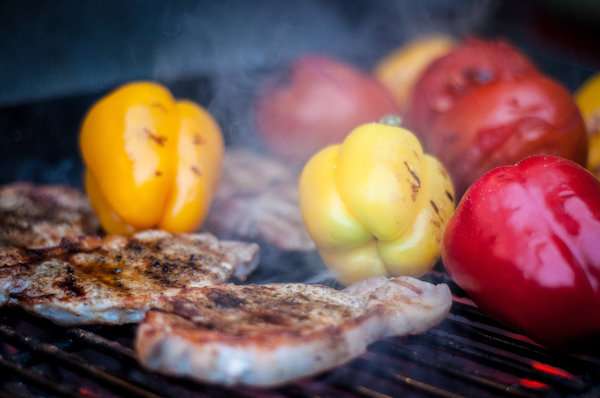 Source: Carnegie MellonAs if it wasn’t enough to worry about the volatile organic compounds (VOCs) emitting from common household cleaners used in the home, now comes word that even restaurants aren’t safe from such emissions.

Commonly attributed to sources such as heavy traffic and power plants, the discharge of harmful particulate matter suspends in the air, becoming what is known as aerosol. However, restaurants are also responsible for creating a type of aerosol in high concentrations called organic aerosol (OA). This organic aerosol is a significant source of air pollution, particularly in areas within the immediate vicinity of restaurants.

"Restaurant food-cooking emissions are a major, if not the major, driver of spatial variability of organic aerosol," said Carnegie Mellon University's Ellis Robinson.

This is due to restaurants cooking with significant amounts of oil as well as other organic matter. The oil and organic matter aerosolize into OA and subsequently ventilate from the kitchen as exhaust, carrying with it the OA produced through cooking out into the environment surrounding the restaurant. Though it has already been documented that cooking is a considerable contributor of OA, Robinson, who is a postdoctoral researcher at Carnegie Mellon’s Center for Atmospheric Particle Studies (CAPS), and a team from CAPS turned their attention to neighborhoods overwhelmed with restaurants and measured air quality in those locations.

Using an aerosol mass spectrometer, the team took air quality measurements throughout the city of Pittsburgh. The device made it possible for Robinson and the CAPS team to trace OA concentrations back to their sources and to accurately distinguish between those sources, be they restaurant or traffic.

Most measurements were taken during the early evening hours when those areas were likely to be flooded with both traffic and increased restaurant activity, thereby ensuring that measurements would reflect maximum OA outputs.

According to those measurements, the team discovered, with some surprise, that of the high-concentration OA plumes emitted in such neighborhoods, seven times out of 10, the source had been restaurants and other cooking sources and not traffic.

Under closer examination, the team realized that this phenomenon was due in part to the fact that there has been greater scrutiny of the automotive industry and its emissions as a source of air pollution, thus resulting in greater regulation of that industry. Meanwhile, restaurants and commercial kitchens have been virtually ignored, with little regulation (apart from New York City and cities in California) over how restaurants vent their exhaust.

However, instead of being alarmed by the findings, Robinson believes that the research will put a spotlight on this particular type of pollution, which is already being addressed in some cities requiring restaurants and similar establishments to have exhaust filtration built into their designs, calling this particular source of pollution a manageable one.

“I don't want someone to see this and think that we need to close all restaurants," he said, "but I think it's good if we've compelled people to think a little more about food cooking as part of the larger air quality picture."

The research appears in the journal Environmental Science & Technology.

So, the simplistic solution is everybody stop eating at restaurants?!?

Restaurants have a vested interest in this air pollution. That's what gets people's appetites fired up.

Re: Study: Restaurants Are Significant Air Pollution Contributors
#4
In reply to #2
Rixter

Next they will be after bbq's, convection ovens, pop corn makers, hot air fryers and toasters.

There seems to be no shortage of people looking for a 'cause'.