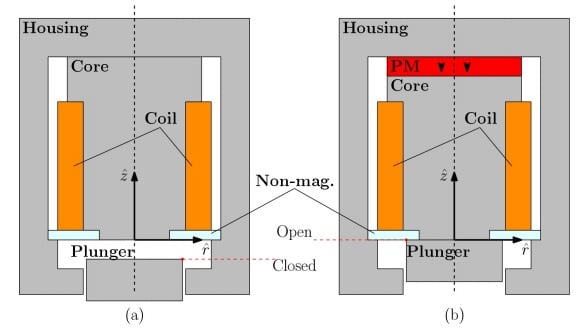 In both instances, eddy currents had dampened plunger speed when operated by an open-loop control scheme. In addition, the induced electromagnetic force increased rapidly, resulting in a quickly moving plunger and unnecessarily high applied forces.

Observations of the reluctance actuator with a permanent magnet atop the core allowed for zero-power latching, providing efficiency gains whenever the solenoid was held in the closed position. The dampened plunger speed and rapid increases in electromagnetic forces were still seen as highly inefficient, propelling researchers to investigate the effects of cascaded closed-loop control.

A fluid-control solenoid valve with an electromagnetic reluctance actuator and a near constant-force spring has several use cases -- as an electromagnetic brake in aerospace applications, to perform fast-sorting tasks in the manufacturing industry, as a fluid control valve in petrochemical processes and to achieve variable valve timing in camless engines in the automotive industry. In each use case fast switching, minimal energy consumption and soft landing are preferred. In addition, the desired improvements would help minimize impact velocity, extend life expectancy and reduce audible noise, vibration and harshness.

By posting a comment you confirm that you have read and accept our Posting Rules and Terms of Use.
Advertisement
RELATED ARTICLES
How does a pressure-compensated flow control valve work?
How do thermal actuators work?
Genvi Solenoid Valves; a New Generation of Versatility and Innovation
The Bürkert direct-acting plunger valves with new coil system
Aircraft actuation technologies: How do electrohydraulic, electrohydrostatic and electromechanical actuators work?
Advertisement