Areva Inc. is taking a lead role in designing, constructing and operating a proposed interim storage facility for used nuclear fuel in Texas. The company will act as the exclusive primary subcontractor for Waste Control Specialist's (WCS) project. 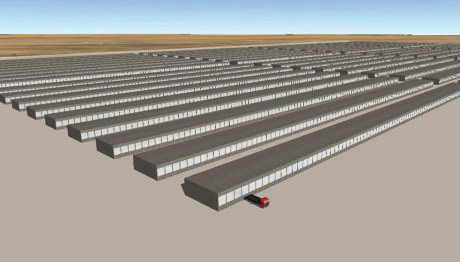 How the CISF would look. Source: WWN, Image credit: WCSThe consolidated interim storage facility (CISF) project also includes services to support the transportation of nuclear materials to and from the facility. The companies will work to support the application process for the facility's license.

Earlier this year, WCS notified the U.S. Nuclear Regulatory Commission (NRC) that it intends to submit an application for an independent spent fuel storage installation license by April 2016. The facility would be located at Andrews in Texas, where WCS already operates two disposal facilities for low-level radioactive wastes.

The Blue Ribbon Commission on America's Nuclear Future recommended in 2012 that at least one interim storage facility should be established while a permanent repository is being developed. The Obama administration decided in 2009 not to go ahead with a permanent repository at Yucca Mountain in Nevada. Pending a permanent disposal solution of used nuclear fuel is currently being stored at reactor sites around the U.S.