Current sensors measure AC and/or DC current levels. The sensors discussed here measure current and provide some sort of output that corresponds to the current being measured. The most important distinction to make when selecting a current sensor is whether AC and/or DC current needs to be measured. Another important specification to consider is if the sensor needs to be in-line with the circuit or if it works by being clamped around the wire to be measured. 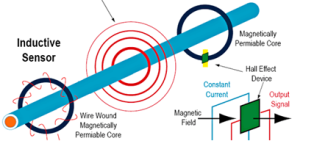 Electric current sensing technologies. Image Credit: nktechnolgoies.comThe technology used by the current sensor is important because different sensors can have different characteristics for a variety of applications. Most sensors work because a current-carrying wire produces a magnetic field. Current sensing resistors are used when current is directly measured in the circuit.

[Find current sensors by Specification or see our Directory of suppliers]

(For a description of the current sensor circuit and a few calculations regarding scale factor and accuracy, watch the video)

Performance specifications describe how current sensor will interact and operate in the desired environment. 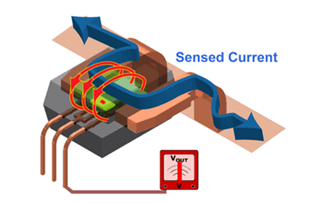 The type of output used by a current sensor depends on the desired application and operating environment.

There are several mounting or installation options for current sensors.

Sensor types can be closed loop -- meaning they have to completely surround the current carrying wire -- or open loop where they don't need to make a complete circle.

There are a variety of applications for current sensors. For example, some devices are used for power metering, control system diagnosis, current supply measurement, and the control of complex loads from electric motors. Others are used for charge integration and condition monitoring of rechargeable batteries. Specialized current sensors, such as those used in commercial appliances, often incorporate safety cut-off features and surge trips. High voltage current sensors are also available. PCB-mounted current sensors combine the benefits of a small footprint with the advantages of signal processing that can be achieved by using an existing microprocessor.

Current sensors that are identified as intrinsically safe (IS) equipment are low-power devices that meet design, installation, and maintenance standards established by the Instrumentation, Systems and Automation (ISA) society. Other current sensors include:

By posting a comment you confirm that you have read and accept our Posting Rules and Terms of Use.
Advertisement
RELATED ARTICLES
Fundamentals of crankshaft sensors
The Nuts and Bolts of Brushless DC Motors
Allegro's cool current sensor improves accuracy and efficiency
Tiny sensors can be affixed to moths, small drones
Which type of speed sensor is best for my application?
Advertisement