An unpowered exoskeleton increases walking efficiency for humans, according to an article published in Nature.

Carnegie Mellon University’s Steve Collins and his collaborator Gregory Sawicki at North Carolina State University have created a wearable boot-like apparatus that, when attached to the foot and ankle, reduces the energy expended in walking by around 7%.

That improvement is roughly equivalent to removing a 10-pound backpack. And, given this device’s simplicity, researchers say it would be low-cost to produce. 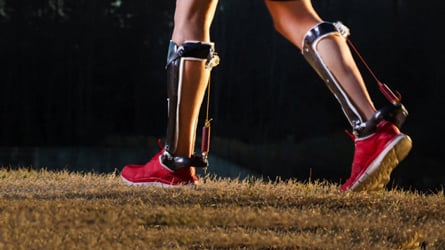 “The unpowered exoskeleton works in parallel with your muscles, thereby decreasing muscle force and the metabolic energy needed for contractions,” says Sawicki.

While muscles use energy in producing force, this device does so passively.

By posting a comment you confirm that you have read and accept our Posting Rules and Terms of Use.
Advertisement
RELATED ARTICLES
Engineers create low-profile ankle exoskeleton for the elderly, soldiers, postal workers
Exoskeleton could help reduce the energy cost of running
Samsung’s GEMS exoskeleton receives robotic certification
Researchers develop robotic exosuit that assists the wearer with both running and walking
Biomechanical Exoskeleton Crowdfunding Campaign Started
Advertisement